New rules will apply to the entire country 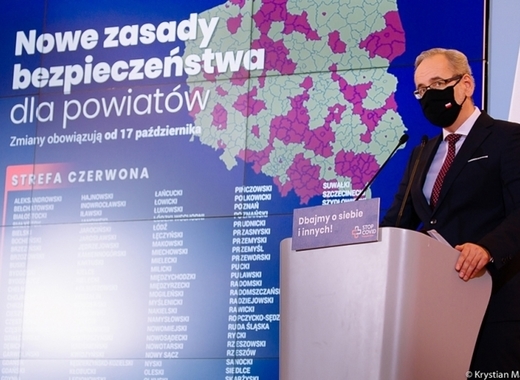 Poland is the latest European country to reinforce the restrictions on its territory as it faces a second wave of COVID-19. Earlier on Wednesday, Polish Prime Minister Mateusz Morawiecki announced on the new rules that will apply to the entire country starting Saturday 17 October. The list of districts that go from the yellow to the red zone has also been expanded to 152, including 11 voivodeship capitals.

Limiting social interactions on the entire territory of Poland

In Poland, new rules will be in effect for the entire country, effective tomorrow. Thus, for the part of the country that falls into the yellow zone:

For the remaining districts (or powiats), which have qualified as red, the rules are even stricter. In addition to what is applicable in the yellow zone, they go even further:

The Prime minister’s office has also released a map with the powiats falling in the yellow and red zones:

“Fighting the pandemic is our most important task. All our activities are subordinated to this. There is nothing more important for the government than ensuring the safety and health of Poles", Prime Minister Mateusz Morawiecki was quoted saying on the Government’s website.

He also explained that government's strategy to combat the pandemic has three main goals – to support seniors, to give adequate access to treatment for patients with COVID-19 and to enact anti-pandemic measures that have the least impact on the economy and everyday life of Poles. The measures will be in place for at least several weeks and will be reassessed if the pandemic situation demands it.

UPDATE 23.10.2020: Prime Minister Mateusz Morawiecki announced that as of Saturday 24 October the entire territory of Poland will be in the red zone.