The Finnish capital and Korkeasaari Zoo included schoolchildren in the game’s design process, asking them to devise the plot and characters

On 21 March, the Finnish City of Helsinki and the Korkeasaari Zoo announced that they have joined forces to launch an interactive learning game. Called ‘Spirit of the Rainforest’, the game uses Augmented Reality (AR) and invites players to learn about rainforests.

As its name suggests, the game revolves around the spirit of the rainforest and its two friends. By playing, users learn more and more about nature and the rainforest. In this way, they help save and strengthen the rainforest’s spirit, which can then continue protecting the surrounding nature. 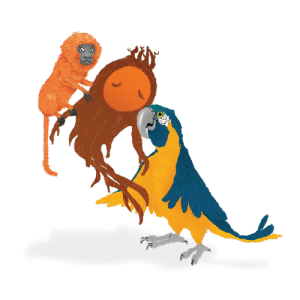 The spirit of the rainforest (Source: Korkeasaari Zoo)

A game for children by children

It is interesting to note that the design of the game began with workshops where primary school students could share their ideas and devise plots, characters, and concepts. Following this, a working group consisting of teachers and experts as well as members from the city’s business department and the virtual studio ZOAN continued designing the game.

Students have then consulted once again as they tested different versions to give their feedback and advice. In this way, the game was continuously tested and updated before being officially launched. Commenting on the importance of including pupils in the design process, teachers Teemu Einola, Topi Perälä and Teppo Manninen shared:

“Here was student engagement at its best: a real-world project where students’ own ideas end up in the final product. They got into different roles in working life as developers, product testers and evaluators and got a real feeling that what they and their opinions matter.”

Although the game’s target group is schoolchildren and young people, all of the zoo’s visitors can play the game for free after scanning a QR code on site. In the future, the designers hope that the game can become available in schools across Finland to help pupils learn about nature and rainforests.