Today, the Austrian forest authorities began a reforestation campaign aiming to plant 1.3 million trees in the next three months. The campaign will last from March until June, with planting starting from lower altitudes.

According to the Österreichische Budensforste (Austrian Federal Forests), the move is aimed at mitigating the damage done to the forests by climate change and winter. In particular, they point out drought and bark beetles as a major source of stress for forests, with the federal states of Lower and Upper Austria being hit particularly hard.

Apart from a large number of trees, the forestry service will also plant a wider variety of species, diversifying the forested landscape of Austria.

Forest authorities will plant around half of the 1.3 million trees in Upper and Lower Austria alone, mainly in the forests around Molln and Waldviertel. There, drought and bark beetles have caused major damages to the wooded areas over the last few years, leaving noticeable gaps in the forest.

Moreover, according to Rudolf Freidhager, director of Bundesforste, authorities need to focus on protective forests in Austria’s alpine regions, such as those around Salzburg, Tyrol or Styria. This is because they function as shields against some natural disasters, protecting local populations.

When it comes to disasters, forests can be quite helpful in flooding prevention, lessening the effects of droughts, landslides and avalanches. Considering the adverse effects of climate change, most of these extreme weather events are supposed to increase in frequency and in volatility. 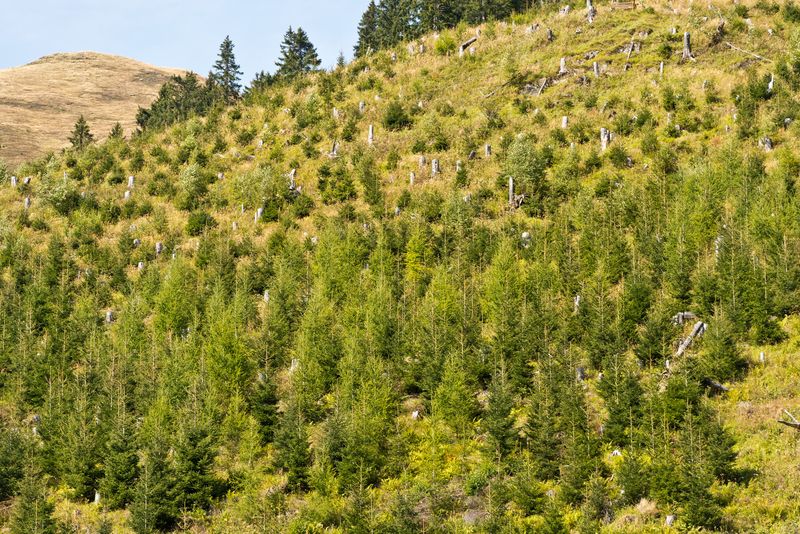 An area that lost some wood and that has recently been reforested,
Source: ÖBf/ W. Simlinger

A diverse mix of species makes for a stronger eco-system

Around 40% of the 1.3 million reforestation plants are larches, which, thanks to their strong root system, can withstand storms particularly well and cope well with drought. Another 35% are spruces, which, despite being less well suited for lower altitudes, are still quite prominent in the Alps.

Additionally, forest authorities will also use oaks and silver firs, as the trees have a deep-reaching root system that can help them access nutrients deep in the soil even in dry times.

Rudolf Freidhager was quoted in a press release, saying: "Wherever possible, we rely on the power of nature in our forests and encourage natural tree growth." He also underlined the fact that Austria has a yearly net gain in forests.

According to him, significantly more new trees pop up than are harvested. Coupled with a sustainable forest management policy, this contributes to a notable CO2 sink for the country. Mr Freidhager explained that using wood to create durable products keeps the carbon emissions stored while planting new trees just ups the carbon storage capacity of forests.