Warsaw pilot supports integration of seniors on the labour market

The decision was praised by local Councillor for Housing, Kathrin Gaal, as a major step towards protecting one of the city’s most prized assets

Vienna announced discovery of geothermal energy 3,000 metres under the city

The Hungarian government is withholding 12 billion forints (EUR 32.7m) worth of subsidy for the city transport system

The winner will be either a hospital in Bangladesh, a gallery in Berlin, or a bridge in Copenhagen

The decision comes after the country recorded almost 26,000 COVID cases on Wednesday

Berlin’s new Humboldt Forum – baroque on the outside, modern on the inside

Berlin’s new Humboldt Forum – baroque on the outside, modern on the inside

One of Europe’s most expensive cultural projects finds itself between the push and pull of post-colonialism, post-soviet sentiment and contemporary art

The Humboldt Forum, a reconstructed version of Berlin’s Royal Palace opened to the public today, 20 July. The ceremony was attended by the State Minister for Culture Monika Grütters, Berlin's Mayor Michael Müller and General Director Hartmut Dorgerloh. The building will house the non-European collections of the Berlin State Museums, as well as art exhibitions. The new museum and gallery were first available to digital visitors back in December of last year, however, it will now be open to in-person visitation.

A turbulent history with no clear final destination

The Humboldt Forum is a replica of the baroque Royal Palace, the main residence of House Hohenzollern from 1443 to 1918. After the fall of the monarchy in Germany, the building had various uses, until it was damaged during the allied bombing of the city in World War II.

During the cold war, the site found itself in the GDR (German Democratic Republic) and was promptly blown up in the 1950s.

The new Palace of the Republic (Palast der Republik) was constructed in its place, with the glass and concrete building being finished in 1976. It housed the parliament of the GDR until 1990, however, it served numerous cultural purposes too. It had a large auditorium, a theatre, a cinema, a large art gallery, restaurants, bars, swimming pools and a video game arcade. 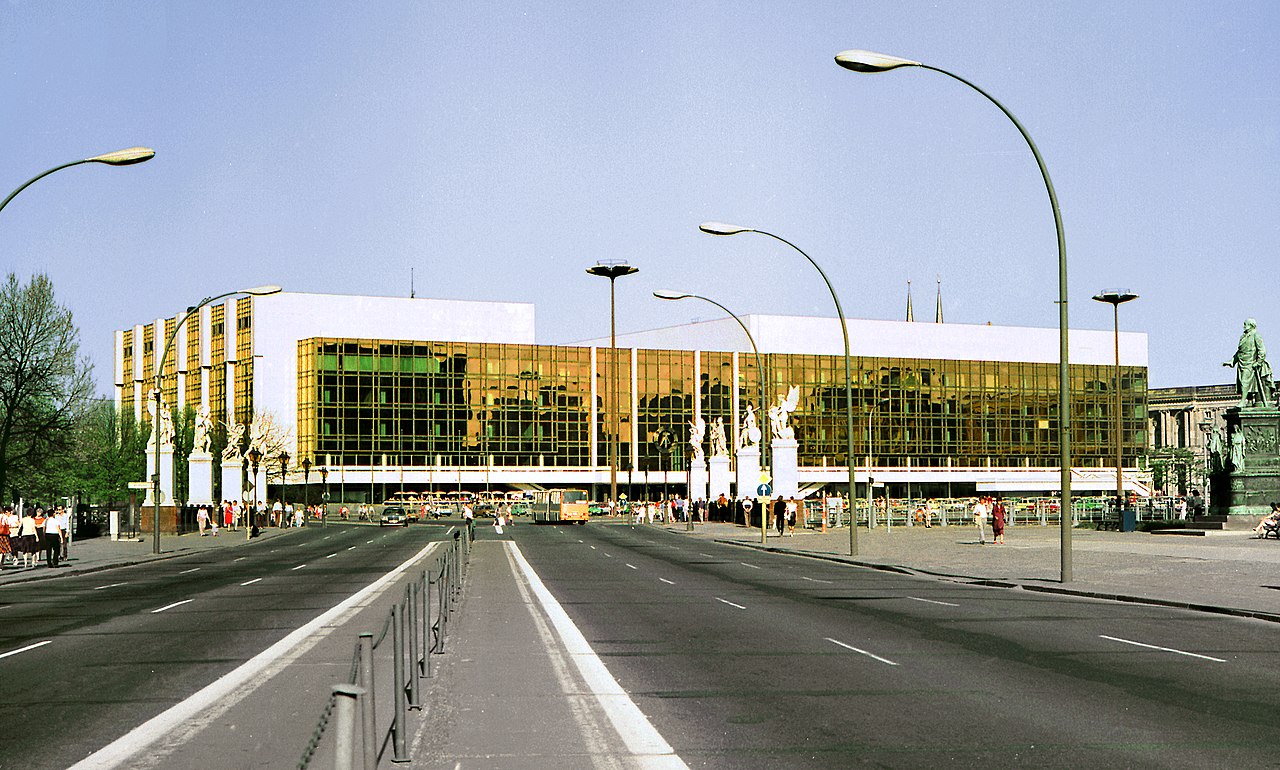 The front facade of the Palace of the Republic in 1986,
Source: Jörg Blobelt on Wikipedia, CC BY-SA 4.0

After German reunification in the 90s, the building became vacant, as it struggled with finding a purpose, as lots of Soviet-era buildings do.

Also, it was permanently closed to the public, due to the fact that it contained over 5,000 tonnes of asbestos, despite the use of the material being outlawed in East Germany since 1956.

The Bundestag voted to demolish the Palace of the Republic in 2003 and the reconstruction of the Berlin Palace (now called the Humboldt Forum). The GDR Palace was demolished between 2006 and 2008, while construction of the new one started in 2013 and was completed in 2020.

The new building is named after the famed German scholars Alexander and Wilhelm von Humboldt. It includes the rebuilt baroque facades of the old Royal Palace and the iconic dome towering over Berlin’s Museum Island, with a modern interior designed by the Italian architect France Stella.

In 2019, the costs totalled around 700 million euros and, at that time, it was considered Europe’s most expensive cultural project.

The building incorporates the exhibitions from the Ethnological Museum of Berlin and the Museum of Asian Art, as well as space for a variety of new artistic, cultural and scientific expressions.

At the same time, the museum has been embroiled in some controversy regarding its possession of looted art from Germany’s imperial holdings in Africa and Asia. In all fairness, the Humboldt Forum has acknowledged the existence of said colonial past and formally pledged to take steps towards decolonisation, however, it is extremely unclear what sort of steps those are going to be.

The past comes back to haunt the new building

While all this is taking place, an activist group has begun to lobby for the demolition of the new Humboldt Forum and the reconstruction of the Palace of the Republic. Their first goal is to erect a bronze miniature model of the Soviet-era palace right in front of the new building.

They have set out a detailed timetable, and give the new building until 2050 before it needs to be demolished – precisely 30 years, the time the Palace of the Republic was up for.

Bucharest announces the winning projects, as proposed and voted by the citizens

Tychy gives away Christmas trees in exchange for used batteries