The new fee will be introduced one year later than planned, as a nod to local hospitality industry

On the margins of the conference, 20 new cities have joined the Pact of Free Cities founded by the Visegrad Four capitals

The measure will go into force on 15 October

The platform democratises access to information about funding management on EU projects, giving citizens the opportunity to report misconduct

Running from September to November 2021, the programme allows people to discover the rich cultural history of St Anne’s Park and Dublin’s archaeological heritage in engaging ways

Entertainment venues can choose to admit only fully jabbed persons

Municipalities in the EU are ill-equipped to handle the digital and green transition: report

Municipalities in the EU are ill-equipped to handle the digital and green transition: report

According to the European Investment Bank, nearly two-thirds of local authorities are too underfunded to handle Europe's ambitious green and digital goals

The European Investment Bank published a report on 2 August, about municipalities and their capabilities to handle the green and digital transition. The study found that nearly two-thirds of the surveyed 685 municipalities are too ill-equipped and underfunded to handle green projects and nearly half are lagging in digital sophistication.

The report, titled “The state of local infrastructure investment in Europe: EIB Municipalities Survey 2020”, was conducted between May and August of 2020. It shows a long dry spell for investments after the sovereign debt crisis and an upwards trend in recent years.

Despite the EU-spearheaded post-Covid recovery plan and the massive drive towards carbon neutrality, the reality for many regions shows a severe disparity between paper expectations and material results.

After a decade of austerity, Europe wants to build back better

“Build back better” is the EU’s main motto behind the massive recovery strategy. The idea is to improve infrastructure and facilitate green and digital transition in the member states, with the aftermath of the pandemic seen as an opportunity.

Municipalities account for 45% of all public investment, making them a key partner in the recovery effort.  The funds are delegated for basic infrastructure like public transport and water, but also redevelopment opportunities for schools, hospitals and social housing. 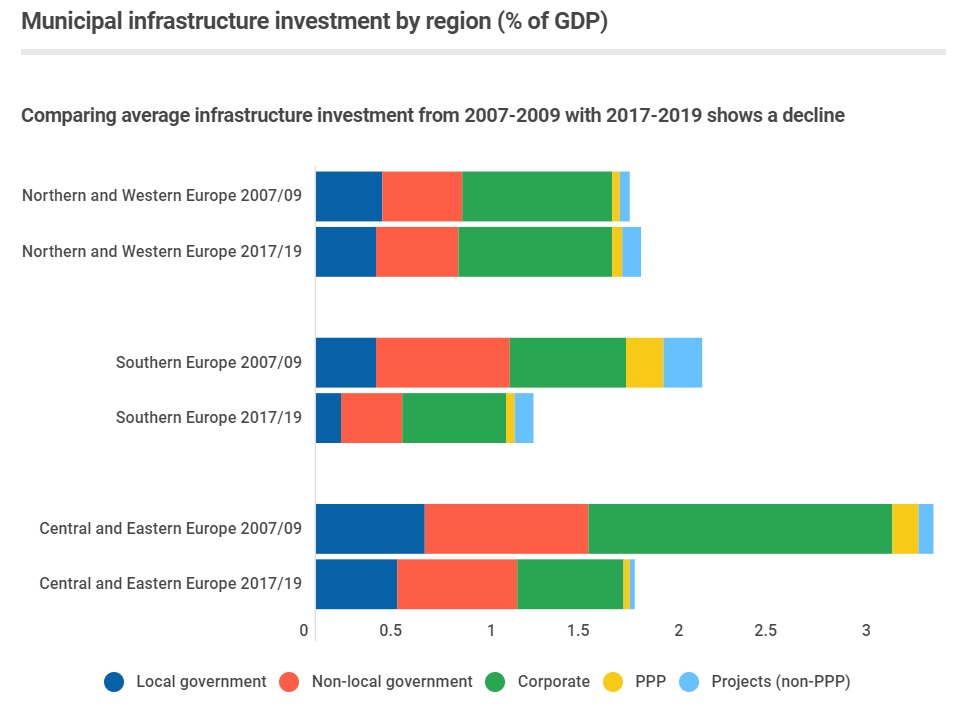 Considering how municipalities account for 70% of all greenhouse emissions, helping their transition is crucial for Europe’s overarching climate targets. Their role in applying and enforcing development strategies is key for fighting climate change and protecting biodiversity.

However, municipalities have suffered from a decade of low investment and austerity, a legacy of the financial crisis. That low investment shows up in the form of persistent infrastructure gaps. They had just begun to address those gaps and newly urgent digital and climate needs when the pandemic hit.

The response to the COVID-19 crisis, though, is very different. Instead of austerity, the EU will spend 672.5 billion in loans and grants to soften the economic blow to the member states and a lot of that money is going into infrastructure.

The devil will be in the details, however. Despite nearly 60% of the funds going towards climate change and the digital transition, municipalities will need the right type of capabilities and expertise to use the funds effectively.

Not all municipalities and investments are made the same

The report shows that investment in municipalities and infrastructure has been growing since 2017 in the least two-thirds of municipalities, signalling the start of a recovery from the mortgage debt crisis.

This was mainly in areas like digital infrastructure (70% of municipalities) and social services (60%), as well as climate change mitigation (56%). However, the survey points to sizable gaps between different European regions with the twin digital and green transition just adding more on top of previous gaps.

Southern Europe, which was still suffering after the financial crisis, continued to hold back on spending. The majority of municipalities surveyed there either decreased or maintained their investment spending, and they dedicated most of their funds to maintenance and repair.

By contrast, nearly three-quarters of municipalities in the rest of Europe increased infrastructure investment.

At the same time, while the municipalities increased spending, many of them felt that the funds were inadequate. Most of their concerns were in climate change mitigation (65%) and adaptation (69%), as well as digitalisation (47%) and public transport (46%) with concerns about urban transport particularly common in Southern Europe.

The municipalities cite these as the main barriers to investment,
Source: the EIB

Municipalities most frequently cite a lack of money as a major barrier, followed by regulatory red tape (both the length of the process and uncertainty about regulations) and a lack of technical skills to execute projects.

At the same time, the pandemic may have weakened municipalities’ climate resolve. They shifted a lot of their intentions towards digital (38%) and social infrastructure (31%). Nearly 25% of local authorities said the pandemic exposed major deficiencies in their healthcare services. These trends were particularly pronounced in Southern Europe and, to a lesser extent, in Central and Eastern Europe. 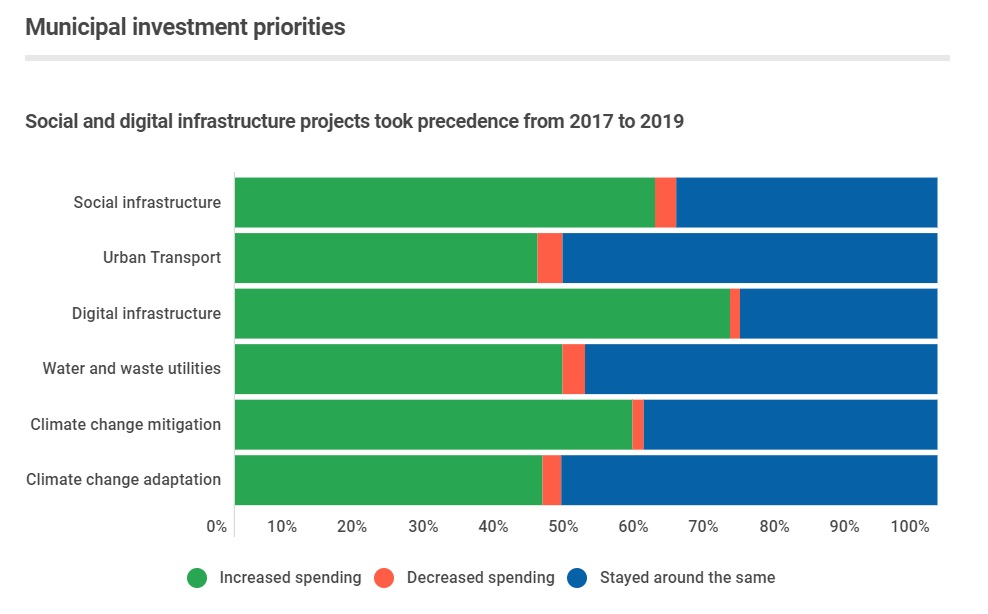 The distribution of priorities for the municipal budgets,
Source: The EIB

As usual, Western and Northern Europe is leading in every metric, while Southern Europe is lagging and Central and Eastern Europe lacks in digital sophistication. At the same time, the reports show a clear awareness in the municipalities themselves about inadequate funding for climate change mitigation and digitalisation and they have a desire to fix the issue.

The European Investment Bank (EIB) Vice President Ricardo Mourinho Félix was quoted in a press release explaining that local authorities are key partners that will help the EIB channel funds towards bettering people’s lives in sectors like hospitals, fast internet and climate-friendly public transport. He continued by acknowledging that COVID-19 presented new challenges that add to a decade long backlog of underinvestment.

The new fee will be introduced one year later than planned, as a nod to local hospitality industry

All
Bulgaria / Innovation and Research

The platform democratises access to information about funding management on EU projects, giving citizens the opportunity to report misconduct

Elementary school children will transform the tree into homes for birds, insects, and bats

All
Ireland / Dublin / Culture and Tourism

Running from September to November 2021, the programme allows people to discover the rich cultural history of St Anne’s Park and Dublin’s archaeological heritage in engaging ways

The European Commission announced a host of new initiatives to support the growing movement, striving for a more sustainable and inclusive Europe

The New European Bauhaus Prizes: one week to go, 20 winners to look forward to

The most creative solutions, out of so many proposals, will be revealed at an online ceremony taking place on 16 September

An interview with the mayor of Cannes (France) on the local approach to tackling the coronavirus crisis, the need for subsidiarity and more

An interview with the Mayor of Lemvig, Denmark