According to Mayor Klaus Schneeberger, the cities of today need density and vertical expansion

Culture and Tourism / Economy and Finance

Some reassuring news, and that doesn’t even take into account most of the summer stats

Which cities and regions will lead EU’s circularity initiative?

Catalonia to establish a Citizens’ Assembly for Climate

The site has historic significance both to the city and to the whole of Europe, as the place where the Iron Curtain fell down

Today, transport authorities in Ireland announced that they will go ahead with submitting plans to expand Dublin’s urban rail network (DART) into the west of the city. Iarnród Éireann, the Irish rail services, plan to create the DART+West connecting the city’s central railway hub Connolly Station with Castleknock, Lexlip and Maynooth in the greater Dublin area.

As RTÉ, Ireland’s national broadcaster, reports, the expansion plan will be submitted to the Irish Planning Board (An Bord Pleanála) this week and if it goes through, construction is set to start in 2024 and end in 2029.

The urban rail expansion in Dublin is part of the city’s vision of improving sustainable mobility. One of the key pillars of its current public transport scheme is the DART – an electric public rail system that connects Malahide and Howth to Graystones, all commuter towns along the coast of Dublin Bay.

The existing line currently accounts for 50 kilometres of sustainable rail connections, integrated with the rest of the public transport system, as well as the national railroads, via Connolly Station.

If, however, Iarnród Éireann is able to implement its full expansion plans, the DART+ network will grow to 150 kilometres and cover many commuter towns around Dublin with sustainable mass public transit. This includes towns like Drogheda in the North, Kildare in the South-West and Dunboyne in the North-West. 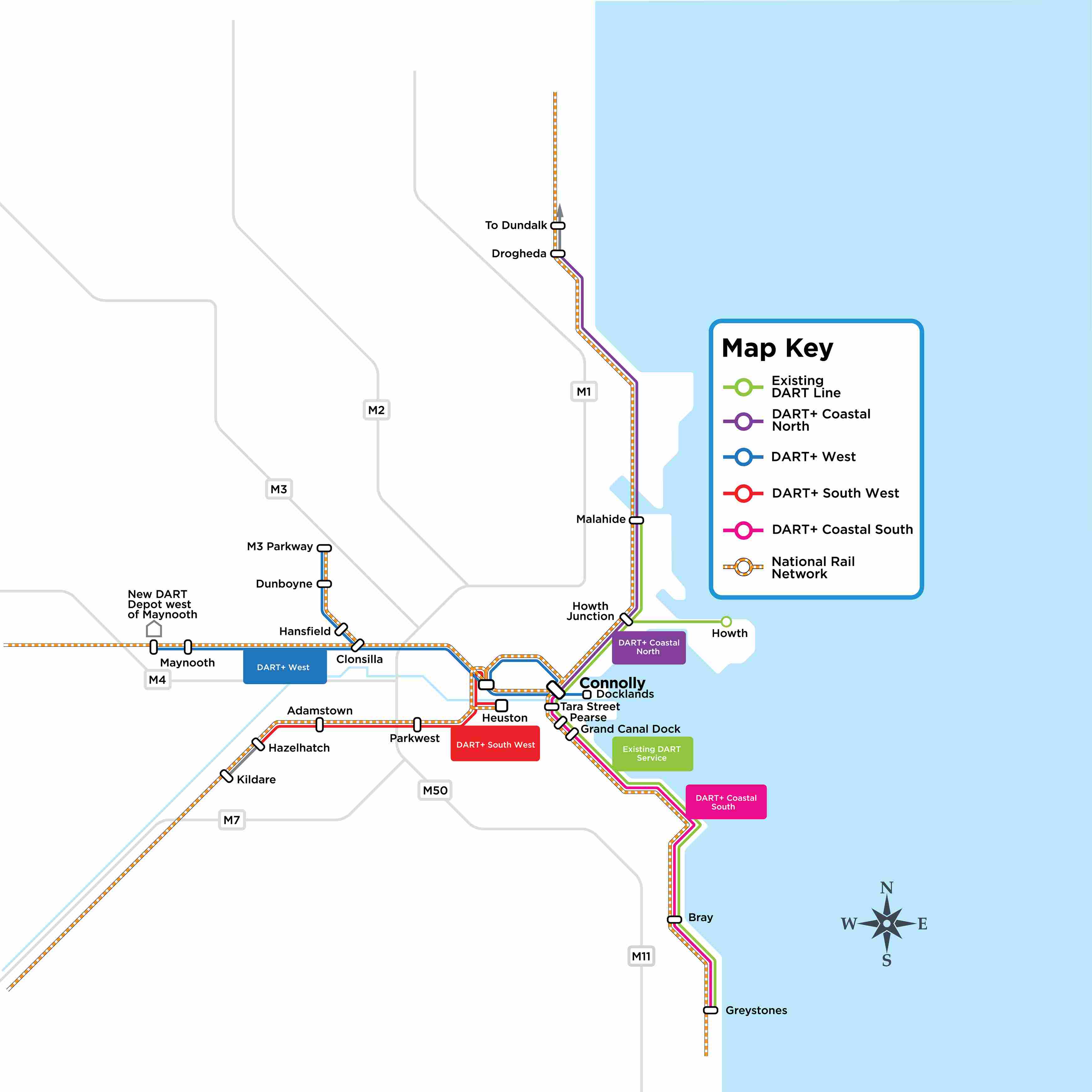 A map of the DART+ project, Source: Iarnród Éireann

According to a statement by Minister for the Environment and Transport, Eamon Ryan, expansion plans include a new station on Spencer Dock, which will connect with the Dublin tram network and the Luas Red Line.

Furthermore, the DART+West will go through Castleknock and terminate at Maynooth Station, where officials also plan to make a new train depot. The depot, in its own right, would help to house the increased number of trains that will travel the new line.

This will be the first-ever expansion of the Dublin urban rail network and, along with the new project for a metro connecting the city centre with the Airport, will completely transform transit in the city, moving away from buses and into mass public rail. This is especially true for people commuting into the city from surrounding small towns.

Additionally, it will give people more flexibility in choosing their housing arrangements, as the city has been continuously struggling with a shortage of living space for years.

All
Estonia / Tartu / Education and Sport

Daring Cities 2022: The forum that puts climate action back in focus

Gladsaxe: One of the first Danish cities to map its food waste