Donations for the reconstruction of Nantes Cathedral start pouring in

However, the damages to be repaired are also considerable 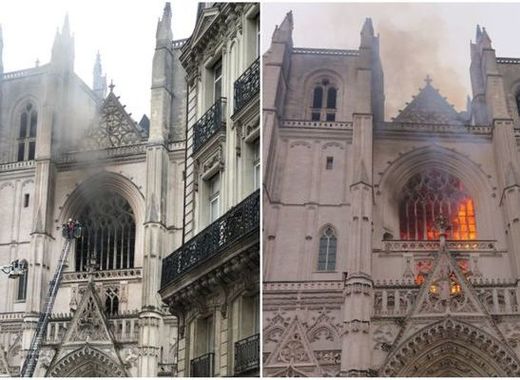 Only 4 days after the famous gothic cathedral of Nantes, France, suffered a blazing fire, the donations for the reconstruction have exceeded 30,000 euros, informs Fondation du Patrimoine, the organisation charged with the collection of funds. However, this is hardly going to be enough in view of the damages on the building and in particular those on the stained-glass windows and the grand organ.

Here is why Foundation du Patrimoine and the French ministry of Culture invite all those who wish to make a donation for the reconstruction of the Saint-Pierre-et-Saint-Paul Cathedral to contribute now.

The gothic cathedral Saint-Pierre-et-Saint-Paul in Nantes suffered a serious fire on Saturday morning, 18 July 2020. The cause of the destructive fire has not been established yet, but authorities are investigating arson. This comes only one year after the iconic Notre-Dame de Paris Cathedral also suffered a major fire.

The cathedral of Saint-Pierre-et-Saint-Paul in Nantes was classified as a historic monument in 1862. Its great organ has been erected in the 17th century. Image by Fondation du Patrimoine

In the past more than 400 years, the great organ, erected in the 17th century, has undergone several restoration operations - extensions in 1784 and 1970 but also darker episodes such as the bombings of World War II or the fire of 28 January 1972, reminds the Foundation.

Now the great organ must be rebuilt in order to resonate again. This is why the Heritage Foundation, in coordination with the Ministry of Culture calls for contributions.

The grand organ of the Nantes Cathedral suffered serious damages during the fire on Saturday. Photo by Père François via Fondaton du Patrimoine

Anyone can contribute to the cause by following this link. All donations collected at this account will be fully donated to the restoration efforts, reassure from the organisation.