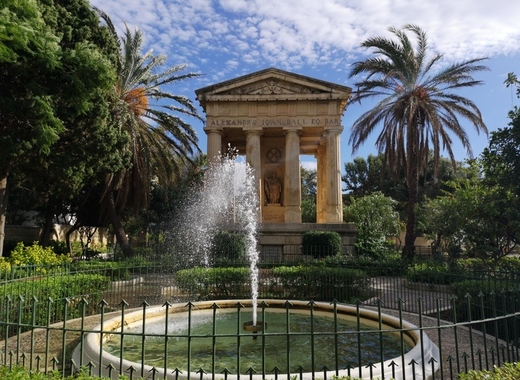 Valletta, one of the pearls of the Mediterranean, combines all that you may expect of a weekend break – unforgettable cultural heritage, breath-taking architecture which exploits limestone in the most efficient way and good leisure options. The smallest capital in the European Union with an area of just 0.8 square kilometres and roughly 6,500 inhabitants offers a surprisingly good overall experience, even if just for one day.

Part of the amazing waterfront area of Valletta

Valletta, also referred to the “city built by gentlemen for gentlemen” is the southernmost capital of the Continent. Together with Floriana, it occupies the peninsula located between two harbours – the Marsamxett and Grand harbour (the major port of Malta). Actually, the two cities have been built strategically at 90 degrees from each other, so as to assure maximum visibility and thereby – to guarantee better protection from enemies.

The Triton's fountain at the entrance of Valletta

From the very entrance to the city, one can grasp how important it was for Malta to be well defended against foreign attacks. Solid walls hewn right from the rock, encircled by a wide and deep trench were one of the ways to do this. Fort St Elmo, the first construction erected by the Knights of St John upon their arrival in 1530 in the uninhabited peninsula, is another testimony and a must-see architectural sight in Valletta.

And surely, there is a lot to be kept safe inside the fortifications. The entire city has been designated a UNESCO heritage site in 1980. Our personal favourites are the two Baraka Gardens, located respectively at the upper and lower parts of the city. They have everything – from nice views over the seafront and selfie spots to wonderful places where you can rest and grab a cup of coffee.

For the lovers of architectural and religious heritage, the top attraction without a doubt would be St John’s Cathedral. The church designed by Gerolamo Cassar was completed in 1576. Its floor covered with around 400 tombstones and monuments commemorating the Grand Masters of Order is nothing short of spectacular. A side altar is decorated with an early Baroque masterpiece of Caravaggio – The Beheading of St John.

Of course, besides Main Republic street where most of the tourist entertainment places and shops are located, there is much else to see. Just strolling around the steep narrow streets of Valletta, marvelling at the mesmerizing low buildings with windows painted in vivid colours is worth the time spent. And if you want to taste some wonderful local food and drinks, the covered market is your place - in any season.

One of the many narrow streets to take photos on

How to travel to and in Valletta

Unless you live in Malta, there is no other way to arrive but by sea or air. The only airport of Malta is actually not based in Valletta, but in the Luqa locality and is easily accessible by public transport. Even a private car or a taxi from Malta Airport to Valletta should do the job, as the ride takes less than 20 minutes. However, due to serious parking space issues, some transport providers might prefer to drop you at a central location instead.

But do not worry - starting from the City Gate, everything in Valletta is within walking distance. Furthermore, within the city (and the entire archipelago, actually), one can use the unified public transport system of buses, as well as ferries, shared bicycles and scooters.

Now you know enough about what to do and see in Valletta, so wait no more, book your trip and pack your suitcase.