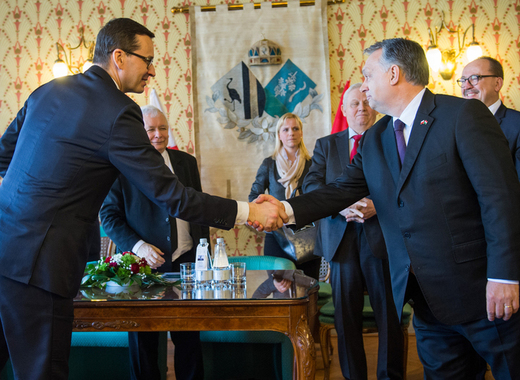 Picture this – you’re French president Emmanuel Macron and you just had your candidate for commissioner rejected by the European Parliament. You then go off on a tirade against the future Commission President whom you handpicked for the position and finally blame everyone but yourself. Not the promising start of a week you might have been hoping for.

Yet it was not only liberal blood that was spilled over the past weeks. On Sunday, 13 October local and parliamentary elections were held in Hungary and Poland, respectively, and both resulted in a bruising for their governments.

The only two countries who have ever faced Article 7 proceedings had their ruling parties hammered by electorates, severely weakening their nigh-autocratic grips.

Clutching defeat from the jaws of victory

Up in Poland the leadership of the conservative Law and Justice (PiS) was feeling pretty good about their electoral prospects. In the days leading up to the vote, some estimates put their levels of support at nearly 49%. In the last weeks of campaigning however, the PiS decided to hammer on the dangers presented by the LGBT community which unfortunately for them galvanized the left and progressive opposition parties.

On election day things didn’t pan out exactly as Jarosław Kaczyński might have hoped. Not only did the PiS score way below some estimates, securing 43% of the vote (but still retaining their majority in parliament), but the ruling party also lost its dominance in the upper chamber – the Polish Senate, managing to win 49 of the 100 seats.

Meanwhile, Robert Biedron, leader of the left-wing Wiozna (Spring), former mayor of Slupsk and perhaps the Left’s most recognizable face was ecstatic at the results – with the coalition of leftist parties securing 12% of the votes after failing to pass the 5% electoral threshold in 2015.

With parliamentary and senate arithmetic suddenly shifting the government is scrambling to push some of its most controversial reforms through before the new MPs take their seats. One such controversial package includes curbing the power of local governments and municipalities when they attempt to stop and prevent the mining of coal in their own regions.

Despite suffering some injuries, Law and Justice is still the dominant party in Poland. But in the future, their own success might prove to be their undoing. With the Polish economy booming, more and more people will eventually turn to caring about other issues – minority rights, climate change, etc., pushing them straight into the hands of the liberal opposition.

By taking a look at the electoral map of 13 October we can easily see two main trends. A sharp east – west divide and a stark urban – rural cleavage. Former Prussian territories and large cities tend to significantly favour liberal and left-leaning parties, while former Russian lands to the East and poorer, rural areas remain staunchly pro-PiS. The apparent lack of government strategy aimed at city-dwellers and high earners presents a long-term issue for the party’s leadership. If the situation is not quickly remedied, the future dominance of the party might be in doubt.

The local elections in Hungary were always going to be a hard battle for Viktor Orban. His party’s approach is specifically tailored to rural, less educated and poorer voters – all of them concentrated outside the big urban areas. Yet Fidesz’s grip on power, combined with a voting system heavily favouring established big parties (first past the post) should have been enough to roll over any kind of divided opposition.

Things did not pan out. For the first time ever, the opposition in Hungary managed to rally behind common candidates and put them forward in some of the country’s large cities.

In a twisted turn of fate, even the far-right party Jobbik turned moderate for these local elections and tossed their support behind the common opposition candidate in Budapest Gergely Karácsony, who won the race with nearly 51% of the vote.

Karácsony’s victory over incumbent Fidesz-backed mayor István Tarlós is an upset of awesome proportions which has severely weakened the ruling party’s standing in Hungary. Furthermore, the mayoral change represents a more substantial paradigm shift. What previously was thought to be impossible, turned out to be highly lucrative. With almost all major opposition parties standing behind a single candidate, they have proven that perhaps all is not lost in the battle against illiberal democracy.

Viktor Orban faces a similar problem like the one of his friend and colleague Jarosław Kaczyński. These local elections proved to be disaster for the ruling party in large urban areas and cities, where more liberal and well-off citizens tend to be concentrated. Not only are Fidesz and PiS facing the same problem, but they are also equally unprepared for the future and have little to no idea how to approach the issue.

With global trends pointing to the fact that more and more people will be heading to cities as their wealth increases, with levels of education rising and with power shifting further and further away from rural areas, many parties will need to figure out brand new strategies aimed at a radically different audience.

So, picture this – you’re French president Emmanuel Macron and you had a bad few days. Yet your opponents, the ones you’ve been fighting over pretty much everything, suffered major setbacks – and it was not parliamentarians who brandished the murder weapon, but rather their own lack of foresight and their own electorates who put them on the sacrificial slab. At least you had a fun weekend.