In 1832, 1838 and 1854, Perugia was hit by earthquakes. Following the collapse of the Roman Republic of 1848-49, when the Rocca was in part demolished, it was seized in May 1849 by the Austrians. In 1859 the inhabitants rebelled against the temporal authority of the Pope and established a provisional government, but the insurrection was quashed bloodily by Pius IX`s troops In 1860 the city was united finally, along with the rest of Umbria, as part of the Kingdom of Italy. During World War II the city suffered only some damage and was liberated by the British 8th army on 20 June 1944.

Perugia is the capital city of both the region of Umbria in central Italy, crossed by the river Tiber and the province of Perugia. The city is located about 164 kilometres north of Rome and 148 km south-east of Florence. It covers a high hilltop and part of the valleys around the area. The region of Umbria is bordered by Tuscany, Lazio and Marche. The population of Perugia is around 170 000 inhabitants. 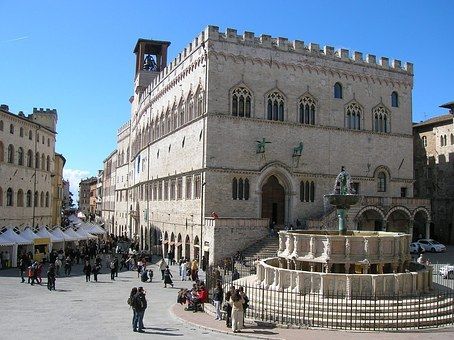 Perugia has had a rich tradition of art and artists. The High Renaissance painter Pietro Perugino created some of his masterpieces in the Perugia area. The other High Resaissance master Raphael was also active in Perugia and painted his famous Oddi Altar there in 1502-04.Today, the Galleria Nazionale dell`Umbria in Perugia houses a number of masterpieces, including the Madonna with Child and six Angels, which represents the Renaissance Marian art of Duccio.