Poland tightens rules in attempt to prevent a lockdown 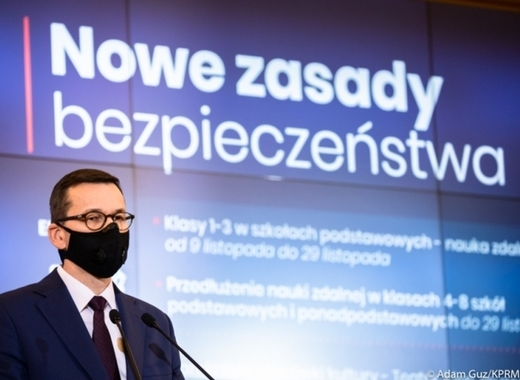 Yesterday saw the announcement of further limitations in Poland, aimed to curb the spread of the new coronavirus. Announced by Prime Minister Mateusz Morawiecki and Minister of Health Adam Niedzielski, they will be valid from Monday 7 November to 29 November.

The new rules come as a response to the unrest and travelling around the country, which have had an impact on the already critical healthcare situation and are seen as a final attempt stem the tide before the introduction of a national quarantine becomes unavoidable.

Although the entire territory of Poland was included in the so-called red zone a week ago, this did not prove enough to slow down the disease, the authorities explained. The continued social interactions and mobility are among the main reasons to blame, according to officials. Government calculations show that if no additional measures are taken, there will be 600,000 new patients before the end of January.

That is why, the authorities in Poland decided to further strengthen the existing limitations in an attempt to prevent the need to resort to the nuclear option – a national quarantine, similar to Greece, the UK, France and elsewhere in Europe. Hence, the new rules concern education, cultural institutions, public gatherings and hotel accommodation.

To start with, from Monday 9 November the distance learning mode extends to also include primary school students (1-3 graders). Cultural institutions such as theatres, museums, cinemas galleries will also close doors as early as Saturday 7 November; same goes for hotels – they will only be able to accept guests on business trips. The number of people in commercial establishments and in churches is also reduced further reduced.

Furthermore, the existing security measures are extended until 29 November. They include the need to accompany children under 16 on weekdays, the suspension of the operations of swimming pools, aquaparks, gyms, etc. Similarly, sports events will continue without an audience, while mass events and gatherings of more than 5 people are banned.

By further tightening the existing restrictions and extending their validity, Poland hopes to be able to control large increases in infections and thereby protect the health and lives of hundreds of Poles.