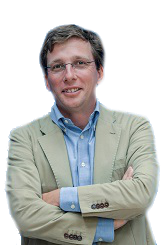 José Luis Martínez-Almeida Navasqüés is the Mayor of Madrid since June 2019 and has been serving as a member of the City Council of Madrid since 2015. He was born on 17 April 1975 in the Spanish capital and studies Comillas Pontifical University to become a state lawyer in 2001.

He has been a Director-General for Historic Heritage of the Community of Madrid between 2007 and 2011 when he was appointed Secretary of the Government of the Community of Madrid. Almeida resigns two years later to become a member of the Secretariat General of what was then SEPIDES, now SEPI. He remains there until 2015 when he was elected a councillor. Two years later he becomes a spokesperson of the People’s Party in the Council and in 2018 was appointed to the National Executive Committee.

On June 15th, 2019 with the support of Ciudadanos and Vox he was elected to succeed to Manuela Carmena to the post of Mayor of Madrid.