It will meet the FIFA/UEFA category 4 standards 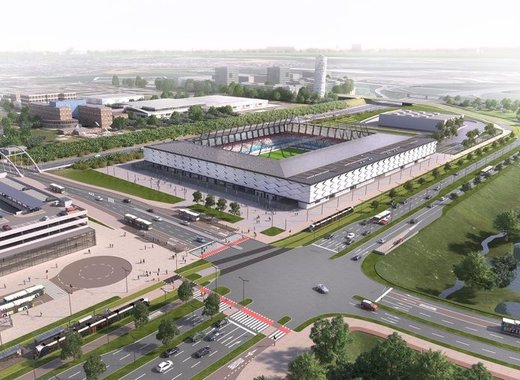 The works on the future national football and rugby stadium of Luxembourg are slowly advancing. The Mayor of Luxembourg city Lydie Polfer, together with Dan Kersch, Minister for Sports, inspected the site on Thursday morning. The works should be completed this autumn and the stadium will be able to welcome the public in earnest at the beginning of 2021, if everything goes forward smoothly, informs l’Essentiel.

Progressing slowly towards the end of construction

The new stadium of Luxembourg is meant to replace the Josy Barthel stadium, which is considered outdated. The new one located in the Luxembourg City quarter of Gasperich was initially scheduled to open last October, but slow construction progress moved the opening date ahead in the future. The first match to be played in the new sports facility could be a qualification for the Qatar 2022 Mundial in March 2021.

The project for a new stadium was designed jointly by the architecture firms Gerkan Marg + Partner and BENG. It includes a hybrid grass playing field, parking area, underground, ground levels, first and second floors. It has a capacity of 9,385 covered seats for spectators.

On top of this, VIP areas, food stands, a business club with a kitchen, rooms and facilities for the press, cloakrooms and all other auxiliary amenities are also previewed. The stadium's facade will consist of diamond-shaped metal tiles, set off by adjustable lighting, reads a press release from the municipality.

The new stadium will simply be called “Stadium of Luxembourg” (Stade de Luxembourg).

The estimated budget for the final project to build the new national football/rugby stadium is 60,358,250 euros including tax. The Ministry of Sport will contribute a 70% subsidy, capped at 40,000,000 euros.

Respectively, the estimated budget to develop the parking area into a multi-purpose space is 791,826.75 euros, provided by the City of Luxembourg.