The city needs help transforming 15.5 hectares of land into a modern residential district

The project is the result of cooperation between Saxony, Saxony-Anhalt and Thuringia and it highlights the strength of cross-regional cooperation

Amsterdam and Rotterdam to help people out of debt

In the Netherlands, 700,000 households struggle with problematic debts

The State of the EU 2021: the new European ideal of ‘Together’

Ursula von der Leyen quoted Robert Schuman and said: "Europe needs a soul, an ideal, and the political will to serve it"

The project is the result of cooperation between Saxony, Saxony-Anhalt and Thuringia and it highlights the strength of cross-regional cooperation

The initiative is part of the drive to zero-emission vehicles

Pirkkala to celebrate turning 100 next year

George Harliono on the state of classical music in Europe

George Harliono on the state of classical music in Europe

The talented pianist shares his thoughts with TheMayor.EU

When we think about classical music, in broad terms, and music for piano in particular, somehow our minds inescapably go to the Romantic era milieu of 19th century Europe that gave rise to titans, such as Beethoven, Chopin and Liszt. These days, however, continental Europe (at least as far as EU territory is concerned) might have lost some of that traditional primacy.

With Brexit that loss has possibly become even more pronounced, given that one of the world’s most recognized piano talents, a 20-year-old by the name of George Harliono, hails from London. He would like to place his city on the world map for classical music but is also of the opinion that both the UK and the EU are way behind Russia when it comes to audience knowledge and appreciation of fine classical music performances.

“There is a huge amount of support for classical music throughout Russia, which I would say is because of the prominence given to music in Russian Junior and High Schools,” he mused. “This has created a large number of excellent Russian musicians. The UK is lagging far behind Russia in terms of children's music education, which I feel is something we should definitely look to improve upon for future generations”.

George Harliono and Andrea Bocelli: collaboration in the works

Harliono has plentiful of reasons, however, to also be grateful for the appreciation that Russians bestow on classical music and young talents. He himself was recognized as one of these having his concerto debut at the age of 12 and playing since then with prestigious Russian orchestras, such as the Moscow State Symphony Orchestra, among several others.

On the question of where in the EU does one find the best venues and most appreciative audiences, his choices fall on Musikverein (Vienna) and Concertgebouw (Amsterdam), given their long traditions and ‘vibrant musical histories’.

His favourite venue to play in the Old Continent, however, has been the Berlin Kammermusiksaal.

“It has a uniquely intimate atmosphere for a hall of its size. Every concert hall has its own character and individual personality,” George explained. “It's not only the acoustics which gives a concert hall its character, it is everything from the architecture, the lighting, the seating arrangements right down to backstage areas. It's a combination of all these aspects which can produce either a very enjoyable environment in which to perform or one which can be problematic”.

This year, the young virtuoso also received deserved recognition from none other than the Italian singer Andrea Bocelli.

Of that meeting, he said: “Andrea was kind enough to invite me to visit him at his home in Forte dei Marmi, where we spent some time playing music together. He had invited me to perform with him, although Covid 19 has made that impossible so far, hopefully, we will be able to reschedule a collaboration in the future”. 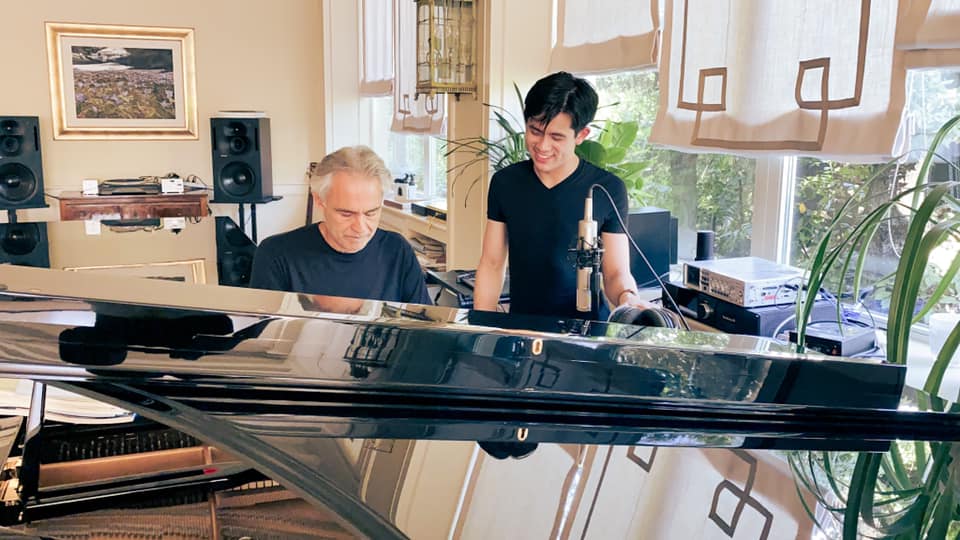 What can be done to raise the profile of classical music in the EU?

It is perhaps these kinds of prominent collaborations that could bring high-quality classical music to wider audiences. In the current context, promotion happens in various ways and a big part of that is played by awards. George Harliono has received several competition prizes. He also mentions that Europe does “have some highly regarded awards, such as the International Classical Music Awards, Gramophone Classical Awards and the Echo Klassik Awards, to name a few”.

However, at the risk, of sounding uncouth, we would propose that his native country does this thing a little bit better with the creation of a biannual classical music version of the BRIT Awards, a well-known brand in pop music accolades. At the last edition of the Classic BRIT Awards (held in 2018), Harliono was shortlisted for the Sound of Classical Award. A feat that probably has served to raise his profile among the general public, too.

The good news is that whether you live in the EU, the UK or Russia you have the chance to see and hear George’s talent thanks to upcoming performances, some of which have been rescheduled from last year. He will be playing Liszt Piano Concerto no.1 at the Frankfurt Alte Oper on 27 and 28 February 2022, Rachmaninoff 2nd Piano Concerto at the Jurmala Festival in Riga next summer, as well as a number of recitals in various cities throughout Europe.

He will also be performing Beethoven Piano Concerto no.5 at Zaryadye Hall in Moscow on 14 December and giving recitals at the Wigmore Hall in London on 7 December and at the Hermitage Museum in St Petersburg on 18 December.

The city needs help transforming 15.5 hectares of land into a modern residential district

The initiative is part of the drive to zero-emission vehicles

The European Commission announced a host of new initiatives to support the growing movement, striving for a more sustainable and inclusive Europe

The New European Bauhaus Prizes: one week to go, 20 winners to look forward to

The most creative solutions, out of so many proposals, will be revealed at an online ceremony taking place on 16 September

An interview with the Mayor of Lemvig, Denmark