Germany is behind on renewable energy goals, despite major growth in wind turbine sector

OBBPoint, billed as the first of its kind in the world, offers redeemable reward points for driving within speed limits

Braga will have an Ombudsman for animal rights

Ulla Vestergaard: Thisted has one of the largest shares of renewable energy production in Denmark

Marcus Schober: Trying to improve my hometown? To me, it doesn’t get much better.

Interview with Mihai Chirica, Mayor of Iași in Romania

Mihai Chirica was born on 1 September 1971 in Iași.

In April 2012 he was elected as a municipal councillor. After the elections, the new local council appointed him as one of the deputy mayors of the municipality.

On May 25, 2015, Mr Chirica was elected to serve as interim mayor prior to his election as mayor in the 2016 elections.

Now he is a President of the Municipal Organisation of National Liberal Party and will candidate this September from the Liberral Party to a new term as Mayor. 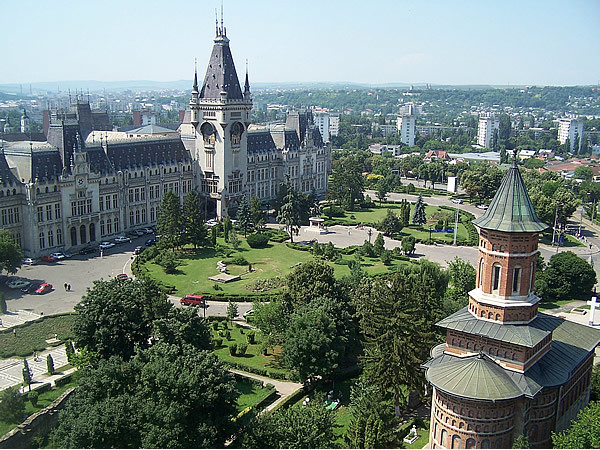 Iași is known as the Cultural Capital of Romania. Photo by Iași Municipality

Mayor Chirica, Iași is a perfect mix between old and new, between history, tradition and modernism. Please describe the municipality in a few sentences.

Iași was always a place where history and modernity went hand in hand. Here, one can find the first Romanian university, the first national theatre (whose building is considered one of the most beautiful in the world, according to BBC) and the first Jewish Theatre in the world. Likewise, the first museum of natural sciences and the first electrical tram in Romania were also built in Iași.

The creation of modern Romania in 1859 but also the Greek Revolution in 1821 both have their roots here. Nowadays Iasi is certainly a major regional and European growth pole in the IT field. Some of the most important companies in the world are already present in our city, such as Amazon, Continental, Conduent (formal Xerox Business Services), Bitdefender, Levi9, etc.

It is no surprise that Iasi has one of the largest spaces housing modern business premises and the fastest retail development rate in the area. All these points have made Iași a "Magnet City", especially for young people (we have the youngest population in Romania) and for global investors.

We are the perfect city for people who want to study or to invest, to start a new business or to spend quality time, to have a long walk in nature (in the largest Botanical Garden in SEE) or to go shopping, to learn about history or to play in our green parks, to have a romantic ride on the Historical 100-year-old tram or learn about the Communist Era on the "Communism tram" tour. Whether you choose to come here for a few days of for a lifetime Iasi will always be a welcoming, open destination.

As mayor of Iași, what are your priorities during this period?

There is no doubt that during this period, we are focused on limiting the spread of the new Coronavirus and, also, on the safe access to healthcare services. We have also set out a number of measures for the gradual restart of the socio-economic activities under the alert conditions implemented at the national level. We also launched a plan of supplementary measures to support the economic agents in Iasi city affected by the COVID-19 pandemic in order to get the city economy back on track.

We hope that the situation will return to normal as quickly as possible so that the relations between citizens and local public administration can continue under normal conditions because we want to keep our citizens' trust in our services.

What are the main achievements of the Iași Municipality?

During this period Iași, the largest city at the Eastern border of the European Union, has been on a normal development path. This has led to national and European recognition of our city's status. That is why, in recent years, Iasi has been ranked as second in Europe (after Skopje) regarding cost-effectiveness in the 'Tech cities of the Future 2020/21' (a ranking carried out by FDI company).

At the beginning of 2018, Iași also won the title "Emerging City of the year" at CEE Shared Services and Outsourcing Awards Gala (Warsaw), competing in the category "City of the year for the development of IT & Outsourcing industry in Central and Eastern Europe (outside of Poland)". As a matter of fact, Iasi as a university centre has highly qualified human resources in the above-mentioned field.

Over the last years, on a national level, we have received the title of ”Royal City” awarded by the Royal House of Romania as a recognition of our historical importance and present efforts to preserve and value our history, and, also, the title of Historical Capital of Romania, which was confirmed by law in 2018.

It is also worth mentioning that, although located in an Orthodox region, Iași was one of the few cities visited by Pope Francis during his trip to Romania (on 1 June 2019).

How important are European funds for the development of the city/region?

After a necessary inflow of European funds during 2007-2013, which were mainly invested in infrastructure, we continued to apply for various projects. Iași Municipality has managed to attract this year grants (mostly European funds) to the tune of over 1 billion lei, that is about 268 million euros.

This is a real success on national level, given that the total non-reimbursable funds attracted in the previous financial year were 125 million euros. With these funds, we managed to bring a new look to our public transport, Iași becoming the first city in Romania with tram infrastructure that is 100% modernized. We have also purchased electric buses, new trams and a new e-ticketing system.

These are all measures that additionally help to reduce pollution and make Iași one of the most sustainable Romanian cities.

According to you, what should be the development priorities for Romania for the next financial period 2021 - 2027?

In the next financial years, I believe that Romania should focus its efforts on the road connecting the North-East region of Romania to the rest of the European Union, which would automatically lead to a reduction in the economic gap between the East and West of Romania, as well as between the East and West of Europe. With European funding, this major infrastructure would help enormously to develop this part of the continent.

On a regional level, we are focusing on the Regional Emergency Hospital. This project is coordinated by the government, with a financing contract signed at the beginning of this year. We hope that the work on it will move forward as quickly as possible.

On the local level, we will continue to modernize public transport, with a focus on the purchase of modern trams and electric buses. In parallel, we will try to encourage the purchasing of ecological cars for private transportation.

Investments to reduce pollution and the digitization of the municipal services are also at the top of our priorities.

Our hope is to succeed in reducing the gap between our region and the other regions of the European Union as quickly as possible. Since joining the EU, Romanians have been able to benefit, apart from investments made through the funds, from another extremely important aspect, that is people mobility be it for tourism, education or work.

But we hope that, through the efforts at local, regional, national and European level, we will create the necessary conditions for our people to return back home, re-join their families and develop here the kind of business and social practices they have seen all over Europe. Only by joining our efforts towards education, stability, solidarity and respect for values, we can build together a better Europe.

To find out more about Iași, visit the profile of the municipality.

OBBPoint, billed as the first of its kind in the world, offers redeemable reward points for driving within speed limits

The Salt House in Latvia: an example that integrates the New European Bauhaus’ values

This showcases architecture that harmonizes with nature

It featured the input of 3 EU citizens, who shared their proposals for more vibrant communities

An interview with the Mayor of Furesø, Denmark

An interview with the Mayor of Elche, Spain

Madrid quick to capitalize on its new UNESCO status

Germany is behind on renewable energy goals, despite major growth in wind turbine sector

Barcelona metropolitan area to get a public bike service

Braga will have an Ombudsman for animal rights