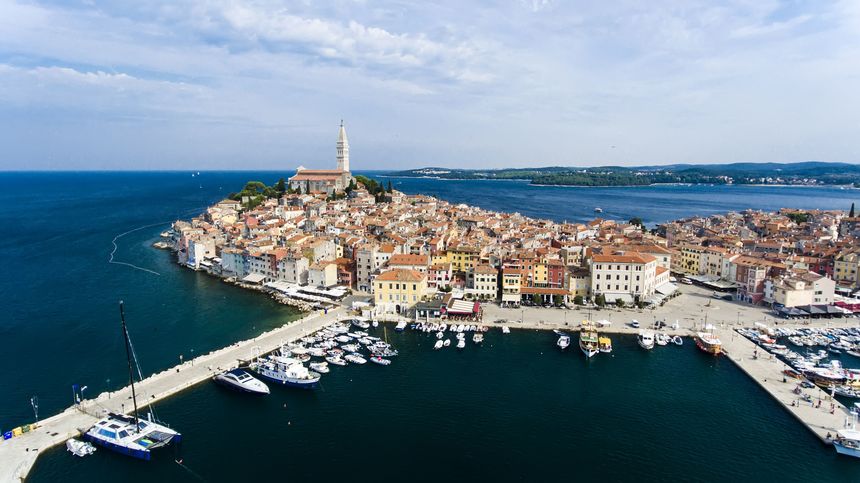 The first mention of Rovinj as Castrum Rubini, as far as it is known dates back to 5th century. According to archaeological findings, the surroundings of today's Rovinj were inhabited in prehistoric times - the Bronze and Iron Ages, when the Histrian culture flourished in Istria and lived there and traded with the Greeks and Etruscans.

After the peaceful rule of the Roman Empire and before the invasions of the Visigoths, Huns, Goths and Byzantines, the ancient Romans, in search of security, inhabited the islands of Mons Albanus, Sv. Katerina, Sv. Andrew and Ciss.

After Byzantine rule, Rovinj came first under the rule of the Lombards and then under the Franks. In feudal Istria, Rovinj lost most of the autonomy of the ancient Roman municipalities, but as an important city, as evidenced by the fact that it participated as a castrum in 804 at the Rižana Assembly, it managed to get some relief.

In the 13th century, Rovinj has repeatedly clashed with the western Istrian cities of Piran and Koper.

In that period, the Serenissima was gaining in strength and wanted to turn the northern Adriatic and the Gulf of Venice and Istria into its shield. Along with other Istrian towns, Rovinj estimated that this strong naval power would be the protector of its trade and maritime interests, and, following the example of Poreč, Novigrad and Umag, in 1283 it sided with Venice. And this is where the long reign of Venice begins.

The Venetian Republic ostensibly grants communal freedom, but reserves the right to nominate the podium, which was in charge of church, political, administrative, commercial and other affairs. Rovinj's self-government was limited and only a small number of privileged families were allowed to participate in the citizens' council. The judges, elected by the council, exercised civil and criminal authority in addition to the podestà.

Already at the beginning of the 15th century, Rovinj had its statute divided into three documents: the first refers to the organization of administration, the second regulates civil relations, possessions, land, livestock, grazing, and the third violations, fines, taxes.

The Venetian economy was mostly commercial, so in Rovinj, with the growth of trade, there were typical urban changes. Along with the already existing fishermen and farmers, craftsmen, merchants and sailors also began to appear.

In the 14th century the first guilds were founded: landowners and farmers, sailors, stonemasons, fishermen's associations, etc. Maritime affairs developed rapidly, there was competition from cities and even armed conflicts.

Venice clashed with Genoa, which in 1379 devastated and conquered Rovinj. They even stole the bones of its protector from the sarcophagus, which were returned in 1401.

Central Istria was in the possession of the counts of Goričko and  with their fall in 1374, much like the county of Pazin, it came under the rule of the Habsburgs

The Middle Ages brought another great plague disaster. Rovinj, however, was partly spared due to the favorable climate.

Before the Ottoman incursions, the coastal parts of Istria were inhabited by refugees from central Istria, Bosnia, Dalmatia and even from Greece and Albania, and the number of inhabitants in Rovinj was growing rapidly. There were also settlers from northern Italy as well. The city in 1595 had 2800 inhabitants, in 1650 about 5000, in 1741. 7966 and in 1775 even 13788.

In the 17 and 18 centuries. Rovinj was the strongest shipbuilding, fishing and maritime center of Istria, and the most important source for extracting white and gray stone.

When Austria, in 1719, declared Rijeka and Trieste free ports, the situation for Rovinj, until then one of the leading maritime cities on the west coast of Istria, worsened.

The Grand Council of the Venetian Republic abdicated on 12 May 1797 and in Rovinj, democratic rule stabilized. This self-government was maintained during the short Austrian rule until 1805 and then during the time of French reign.

In 1813, the Austrians, again in power, dismantled all of Napoleon's laws and abolished Illyrian institutions. Rovinj, which was confirmed the status of a city in 1821, between 1825 and 1860 belonged to the Istrian region, which, with the Imperial Patent of February 26, 1861, became an independent province with the status of margraviate and its National Assembly. Istria was divided into county captaincies, ie court districts, including Rovinj.

During the Austro-Hungarian rule, Rovinj developed in industrial, maritime and cultural terms. In 1816, public lighting was introduced.

With the disintegration of the Austro-Hungarian monarchy, Rovinj came under Italian rule, which lasted until the capitulation of Italy.

Rovinj-Rovigno is a Croatian town, situated on the north Adriatic Sea.  It lies on the southwest coast of the Istrian peninsula, counting approximately 14.300 inhabitants. The town is officially bilingual, Italian and Croatian.

Rovinj-Rovigno is a popular tourist resort and an active fishing port. 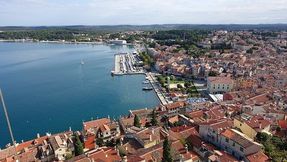 The town is famous tourism destination. During peak season its bars, restaurants and art galleries work long hours and are full of tourists.

The most attractive part of the city is its very centre, extending from the main bus station towards the old part of town, where most bars and clubs are located.