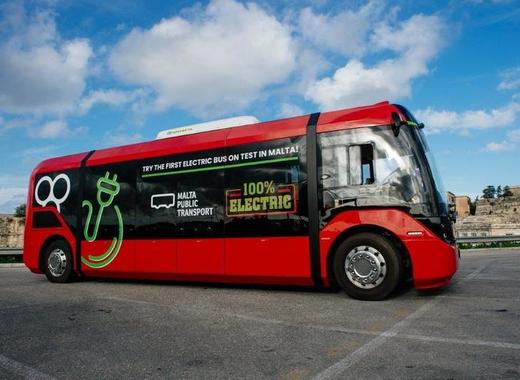 Malta Public Transport (MPT) launched Malta’s first fully-electric bus in conjunction with Transport Malta and TAM-Europe. The Vero 9 model will go on a trial period to test the performance of the 100% electric engine on Maltese roads, the national bus operator announced yesterday.

The pilot project will assess the efficiency and adaptability of the e-bus, given the specific road characteristics of Malta such as short distances between bus stops, sloping terrain and narrow roads with many turns.

Bus and taxi are the only means of land public transportation in Malta nowadays. An extensive bus network with over 2000 stops covers all localities.

During the trial phase, the zero-emissions bus will operate in parallel with the current public transport network as the company will collect feedback from passengers and drivers.

MPT Chairman Felipe Cosmen stressed that this clean public transport initiative is among the novel solutions that the company is on the lookout for to help reduce emissions in Malta and offer convenient and reliable alternatives to private transportation.

Since the start of its operations in 2015, Malta Public Transport has overhauled its existing fleet with more than 250 brand new buses equipped with the latest Euro 6 engines. This makes Malta’s bus fleet one of the youngest and cleanest public transport fleets in Europe, Cosmen added.

All waste is recycled

MPT’s sustainable efforts go beyond the vehicles. The company recycles all disused materials across the operation, including oils and fluids, engine parts and tyres. The group’s international experience allows it to maximise solutions in the transport industry and adapt them to Malta’s needs.

Mr Joseph Bugeja, Transport Malta Chairman and CEO welcomed the initiative as a strong sign of the collaboration between the authority and the operator to continuously improve the public transport service in Malta. He pointed to the year-on-year increase in bus passengers, culminating in the record-breaking 58 million in 2019 which illustrated in the best possible way the success of public transport.