After the lockdown ended, the city’s cleanliness rapidly deteriorated 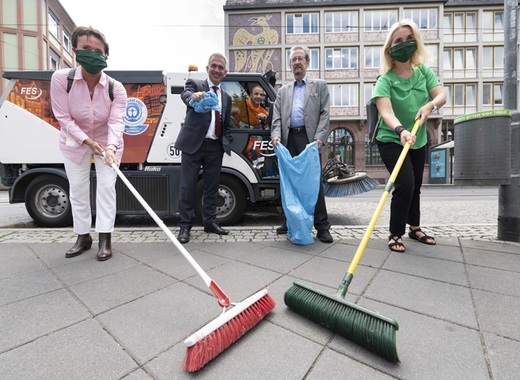 The lifting of the lockdown in the German city of Frankfurt has been progressing pretty much without a hitch – with one main exception – namely the stark rise in pollution. When locals were finally once again allowed to go outside of their homes and visit bars and restaurants, it appears that they had forgotten to take their manners with them – or at least that’s what local officials believed when they introduced a new plan aimed at keeping the urban area clean and hygienic.

"The complaints have been increasing over the past few months - and we as a city are required to do something," stated the mayor of Frankfurt Peter Feldmann. He further explained that party goers and nightlife enthusiasts have been leaving large piles of trash in their wake around the city and have been engaged in other forms of public indecency that are negatively impacting the safety and cleanliness of the entire urban area.

The heads of the two main departments engaged with the problem – namely the local police and the sanitation team – have put forward a number of proposals. They claim that the path forward should feature not only penalizing measures but also more sustainable policies. So far – right up until the pandemic, their joint work had been widely regarded as successful in Frankfurt.

“Before the corona pandemic started, I saw a good way of keeping our city clean over the long term. Our team in Sauberes Frankfurt, the #cleanffm campaign and the FES have been successful in their work. Then Corona came. Since then, the city has been littered like never before, although the FES has been working for months to the point of falling.”, stated Environment Director Rosemarie Heilig.

Instead, following the lockdown, an entire change of mindsets for the citizens of Frankfurt will be needed. In the aftermath of the pandemic, many traditional venues are still closed, making it harder for locals to enjoy themselves and prompting them to find other venues for entertainment. It is then the role of local authorities to facilitate such a search and to deal with the problems that arise as best they can.