He has been mayor of Mechelen since 2001, minister-president of Flanders and MP in the national and regional parliaments – he is Bart Somers 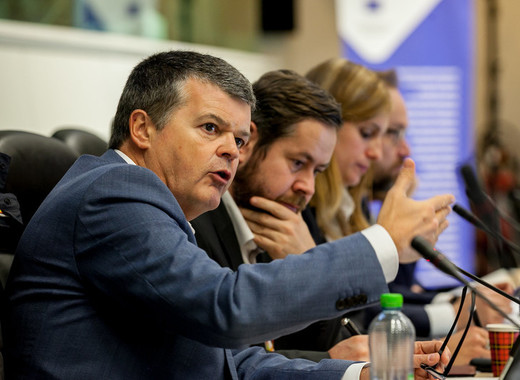 This week we take a look at Bart Somers – the mayor of Mechelen, Belgium

Who is Bart Somers?

Bart Somers has been mayor of the Belgian city of Mechelen since 2001. During his tenure, he has managed to outmaneuver and overcome the ever-rising tide of nationalism and populism in Flanders and has positioned himself and the city as a whole as one of the main bastions of liberalism in the region. But before we get to the here and now, let’s take a quick look at the path Mr. Somers has walked over the past few decades.

He started his career in the 1990s, when he joined the main liberal force of Flanders, the VLD. His first major breakthrough was his election as City Councillor of Mechelen in 1994. Over the next few years, he worked with the then PM Guy Verhofstadt and in 1999 was first elected as a member of the lower chamber of the Federal Parliament. While he was serving out his term, he announced his candidacy for the mayoral post of Mechelen. He has held the position since 2001. Just a few short years later he became minister president of the region of Flanders and joined the Flemish regional parliament. He was also the head of the VLD for 5 years and now chairs the party’s group in the regional legislature.

By the end of his current mandate, Bart Somers would have been mayor of Mechelen for over 20 years. It’s impossible to understate the trust and faith placed in him by locals – winning election after election while consistently increasing your lead over the other candidates is without a doubt no small feat. Mr. Somers’ successes have also been noted outside of the city and the country, with him being named World Mayor 2016 in honour of his role in turning Mechelen into one of the most attractive cities in Beglium.

When Bart Somers first took over the role of mayor of Mechelen, the city was nowhere near the top of any rankings when it came to safety, cleanliness, quality of life etc. Quite the opposite in fact - according to Mr. Somers himself, people were ashamed to admit that they came from Mechelen. But after two decades of hard work and constant engagement, Mr. Somers has managed to turn everything around. His absolute dedication to constant public engagement has left people with the sense that they are being listened to and their suggestions and worries are being heard and acted upon. Furthermore, his open-minded approach has allowed citizens to significantly contribute and take part in the process of improving the city.

One of Mr. Somers’ most important achievements, however, has been his approach to crime in the city. He believes that without an absolute feeling of safety and security, no citizen can be successful. His tough approach to crime has led to him being labeled Mr. Zero Tolerance by his constituents. But it looks like everything has paid off. The liberal politician’s approach to crime is centered around individuals and their roles in society and has led to major successes in the field.

Island of tolerance in ocean of distrust

Mechelen is by far one of the most diverse places in Europe. The city is home to over 120 nationalities, representing numerous religions and thanks to the efforts of its mayor, it has become a beacon of hope that different societies can work together for the common good. The first large number of non-european migrants arrived in Mechelen in 1968, mainly from Morocco. Their descendants represent around 16% of the city’s total population. Nearly 20% of the citizens of the Flemish city identify as Muslim. Yet, despite far-right politicians claiming that migrants are here to destroy our way of life, nothing of the sort has happened in Mechelen.

If you ask Bart Somers on how he approaches the topic of migrants, he will answer that there are no migrants in Mechelen – instead everyone is first and foremost a citizen of the city, who is unique and completely different from everybody else. This individualistic approach has allowed the mayor to cement Mechelen’s place in world rankings as one of the most tolerant and open cities in the world. His success in the matter is further exemplified by the sheer numbers of Muslims that left to fight for ISIS in 2015. That number was zero. Despite the fact that Belgian muslims were on average more prone to leave the country to fight in Syria.

Mechelen was also the only city in Belgium which specifically asked for permission to house Syrian refugees and the mayor’s team developed an in-depth programme of integrating them in Belgian society – including language lessons, cultural and societal courses etc. He believes that while some citizens were opposed to the idea at first, by working and helping the refugees, residents of Mechelen learned to overcome their fears and prejudices and in the end welcomed everyone fleeing the horrors of war.

It’s no secret that far-right nationalist parties have taken center stage in Flanders. The rise of Flemish nationalism, based on anti-immigrant, anti-EU and anti-Belgian rhetoric has led the country to many crises when politicians attempt to form federal governments. The problem posed by the rise of such parties is especially hard felt by Flemish liberals who have been seeing their support dwindle over the past few years, in favour of more radical political actors. This, however, is not the case for Bart Somers and the city of Mechelen.

The liberal mayor has been at the forefront of fighting the rise of far right populists in the country and has no plans of backing down, claiming that they are at the heart of the biggest political crisis since World War 2. And his approach which we have so far outlined appears to be working, with Mr. Somers receiving a record number of votes in the last municipal elections in 2018.

While the struggle to find a functioning governing formula on the federal level continues, politicians everywhere might want to look at the example set in Mechelen. By approaching citizens as individuals and talking to them like normal human beings, by ensuring complete equality not based on artificial constructs, Bart Somers has managed to not only beat back the populist tide, but to show how it can be done – not by compromising with the far right but by improving the lives of citizens.