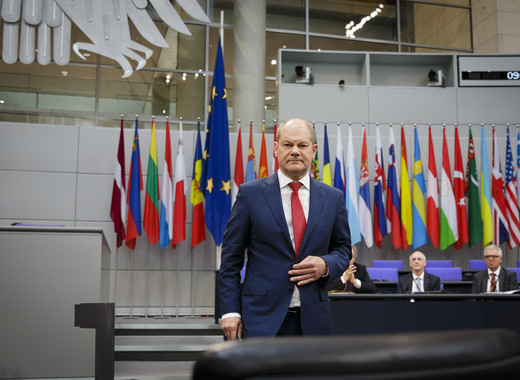 Few people can boast a political career with such an upward trajectory (up until the very end) like Olaf Scholz. His wild successes and popularity as mayor of Hamburg have secured him a comfortable seat at the high table of German politics. So, get ready to learn more about this week’s Major Mayor – Olaf Scholz.

Who is Olaf Scholz?

Born on 14 June 1958 in the town of Osnabrück, Olaf Scholz spent most of his early life in one of Germany’s most important and well-known cities – Hamburg. There, he studied at the University of Hamburg and graduated as a lawyer with a specialization in labour law.

Scholz quickly became engaged in the country’s political life and became an active participant in the local youth branch of the German Social Democratic Party (SPD) in 1975. After rapidly climbing through the ranks, he quickly ascended to the position of Vice President of the International Union of Socialist Youth.

Soon after he was elected chairman of the SPD Altona branch and represented the district in the Bundestag until 2001 when he first entered local and regional government – namely as Minister of the Interior for Hamburg under Mayor Ortwin Runde. Over the next few years of his career in the national parliament, Scholz worked closely with members of Angela Merkel’s own party, the CDU, in order to preserve and protect the first CDU-SPD grand coalition. In 2007 he assumed the post of Minister of Labour in Social Affairs in the same government he had spent the last couple of years protecting.

In 2011 Scholz withdrew from national politics and went all-in in the state elections in Hamburg. He led the local branch of the SPD to a striking victory, with the party winning 48.3% of the votes and 62 of the 121 seats in the local parliament. Soon after, Olaf Scholz resigned from the Bundestag and began serving as Mayor of Hamburg. In 2015 he yet again led the SPD to victory in the city and presided over a red-green coalition, again serving as mayor.

The 2017 German national elections brought unprecedented chaos to a country often associated with calm and steady leadership. The rise of the far-right AFD, the losses of the SPD and the failure of the CDU to reach a coalition agreement with the Greens and the liberals led to the creation of yet another GroKo (grand coalition). In 2018 Olaf Sholz became Vice-Chancellor of Germany and Federal Minister of Finance.

Olaf Scholz managed to drag out the Hamburg SPD out of serious slump. The party had been losing election after election in the Hanseatic city and managed to regain its momentum only after Scholz became its leader.

Thanks to his efforts the 2011 Hamburg state elections delivered a substantial victory to the previously struggling local SPD and secured the party a (slim) majority in the state parliament. Under his leadership, Hamburg would undergo a quick and effective transformation into a true city of the future – a smart city, caring for its citizens through efficient and people-friendly high-tech methods. He also introduced higher city spending for social housing and care for children and new mothers. Yet his approach was always a practical one – focusing on issues that would either benefit the citizens or the city’s finances, shying away from big spending ideas that might not result in a net benefit for his constituents.

Scholz also presided over one of the city’s hardest periods in the last few years – the G20 summit in Hamburg. Violent clashes between far-left protesters and police, the destruction of private and public property, damages for thousands of euros and a mass exodus of locals to the countryside to avoid precisely these happenings – all these issues were handled by the local administration of Hamburg – even though Scholz himself was criticized either for using too much force to deal with the protesters or for using too little of it.

Nonetheless, despite the G20 events, his popularity among citizens of Hamburg remained high all the way up until he left the post of mayor in 2018 when he rejoined the Federal Government as Minister of Finance.

Olaf Scholz’s practical and pragmatic approach has been on display ever since he began his party and political career. During his early years serving in national politics, he was aligned with the then-dominant Third Way approach of Chancellor Gerhard Schroder. Scholz was supportive of the measures and policies proposed by the chancellor aimed at restructuring the German economy, despite widespread opposition from the more leftwing members of the party – thus he has often been described as a member of the group’s conservative wing.

Two major traits can be outlined as most defining for Olaf Scholz’s recent political career and it is precisely those two traits that have allowed him to survive in dangerous political waters. They are his approach to fiscal policy and his desire to protect and preserve the GroKo.

The so-called “fetish” of the CDU, the “schwarze null” is not only a fiscal policy but a political project and a way of life in and of itself. It stipulates the need for balanced budgets without any borrowing, aiming to eventually reduce the total German debt to 0% of GDP by operating on constant budgetary surpluses.  The “Black Zero” thinking has seeped into every venue of the German political establishment and going against it was considered unthinkable up until very recently.

Even Olaf Scholz, a member of the German Social Democratic Party is an avid supporter of the policy, not shying away from publicly proclaiming its virtues. After taking office he quickly attempted to distance himself from ex-finance minister and Black Zero virtuoso and mastermind Wolfgang Schäuble by proclaiming that he’s not in the business of dictating austerity measures to other EU countries (referencing the handling of Greece during the debt crisis)  – yet on national fiscal policy matters its hard to see much of a difference between the two of them as they remained pretty much perfectly aligned.

However, over the past few months, the Black Zero has been coming under heavy strain – in part due to global economic slowdown, pressure from the ECB, the faltering of the SPD in the polls and of course the constant nagging of other Eurozone countries who decry the German approach as unambitious and close-minded. This has prompted Olaf Scholz to embark on a spiritual journey of self-discovery in order to bridge the gap between his own understanding of economics and voters who in the past year have turned away from the social democrats in favour of other parties.

The SPD leadership elections last week might have been among the most important votes in the party’s recent history. Faced with a total collapse, the social democrats were and still remain deeply divided in two wings that both polled neck-and-neck up until the very end. The first group was led by Olaf Scholz and Klara Geywitz - the defenders of the CDU / SPD government and representatives of the more conservative members of the party, while the second was headed by Norbert Walter-Borjans and Saskia Esken, who represent the SPD faction that wants to leave the GroKo and go into opposition so that it can recover.

The results of the Saturday vote revealed a deeply divided party with the GroKo sceptics winning a slim 53% majority of delegates’ votes. The issues that have plagued the party for the past year have seriously damaged not only its image but also its members’ morale – something that must be addressed by its new leadership in the face of a growing threat from the far-right AFD in the east and the Greens in the west.

And this is where the upward trajectory of Olaf Scholz’s career appear to end – at least for the moment. His practical and no-nonsense approach served him well throughout the years as mayor of Hamburg and Finance Minister, but the disgruntled SPD party base appears to have needed someone more radical and ready to try a new approach. But in the end, who knows, the former mayor’s steady hand and pragmatism might remain in high demand in a future that looks anything but certain.