Yesterday, Germany’s tallest wooden skyscraper broke ground in Hamburg. The building is called ‘Roots’ and the impressive concrete and wooden structure, sitting at 65 metres and 19 floors. The Mayor of Hamburg, Peter Tschentscher, attended the ceremony in HafenCity and symbolically laid the foundation stone together with Fabian von Köppen, the head of Garbe Immobilien-Projekte GmbH, and Jörg Soehring, the board of directors of the Deutsche Wildtier Foundation.

Building with carbon-neutral materials – it is worth it

The building is set to finish in 2023 and it will be the tallest wooden structure in Germany. Only the central stairwell and the foundation stone are made from concrete. Façades, ceilings and room walls are made of wood - up to the 18th floor. The foundation stone, however, needed to be significantly thinner than normal, because the building is going to be significantly lighter than usual.

On the other hand, timber construction is around 12% more expensive than concrete and could end up costing even more, considering the recent rise in the price of wood in Europe. However, the financial cost of the building will be offset by the fact that wood is a carbon-neutral material. For ‘Roots’ this means 5,500 cubic metres of timber. 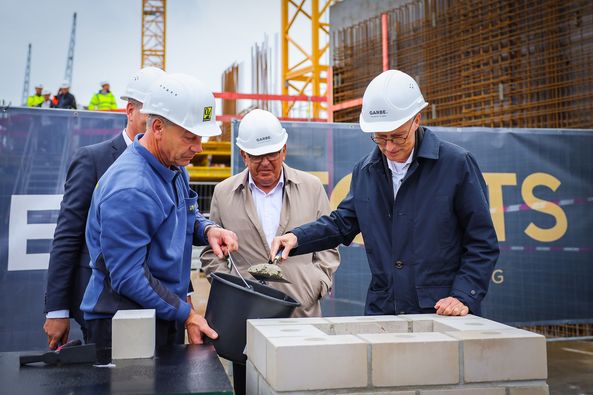 The building will have 128 condominiums and another 50 that will be publicly funded. At the same time, the Deutsche Wildtier Foundation will use 4,000 square metres of the building as their headquarters. The space they occupy will have offices, exhibition and restaurant spaces.

Mayor Tschentscher commented on Facebook, that he is a son of a timber merchant who also traded large quantities of wood for the construction industry, creating a line continuity with the good practices of the past.

He continued: “HafenCity meets the highest standards for sustainable urban development - with attractive apartments, modern workplaces and low-emission mobility. With the project 'Roots', Germany's largest wooden skyscraper and one of the most modern and sustainable residential and office buildings is being built in the Quartier Elbbrücken.”