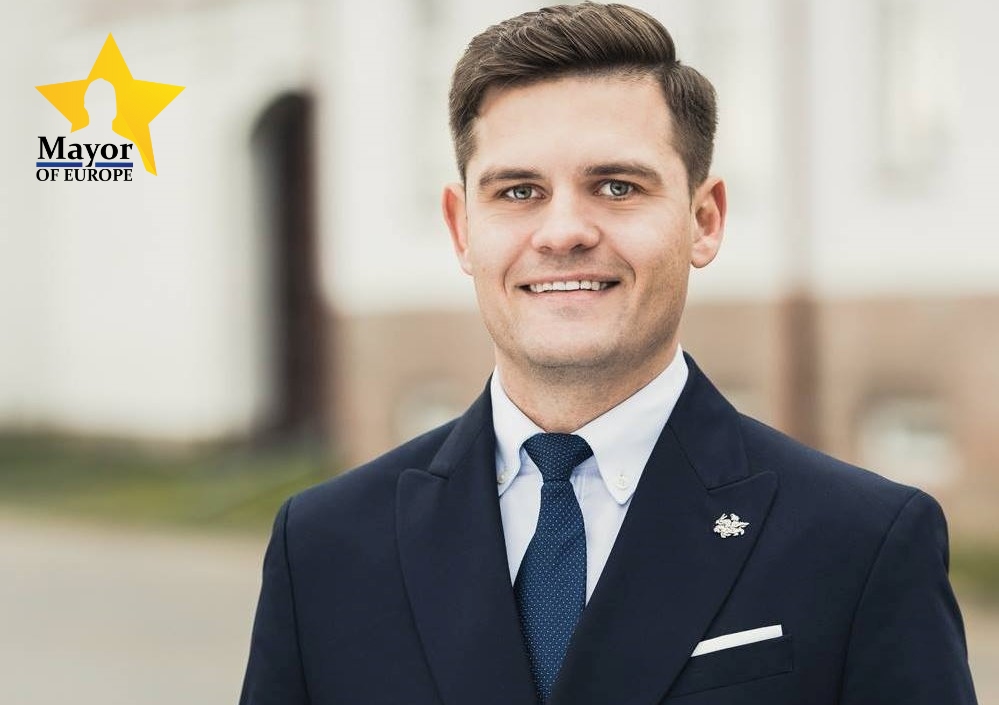 Maybe we are too small to change the world,
but we are big enough to lead by example

Dovydas Kaminskas was born on 25 January 1989 in Tauragė. In 2012, he obtained Bachelor of Laws from Mykolas Romeris University, and later a Master of International Law from the University of Copenhagen. In the period 2015-2019 he held the position of advisor to the mayor of Tauragė district municipality, before becoming a mayor of that town.

Mr Mayor, as the leader of a small city, what is the significance of Tauragė being named one of the 100 Climate-Neutral and Smart Cities that will seek radical transformation by 2030?

Being accepted into the group of the greenest and most ambitious European municipalities is a great honour and this assessment is particularly important for Tauragė. However, Tauragė has been consistently working towards the implementation of the goals of the European Green Deal for seven years, so this decision of the European Commission is not a result of luck, but a result of long and systematic work.

This is also proof that being a small municipality does not mean that you have to be just a follower - with the help of ambition and courage, you can be a creator of change and an example for other municipalities. As we often say - "Maybe we are too small to change the world, but we are big enough to lead by example".

Tauragė might be small, but it punches above its weight, especially in terms of energy efficiency implementation. You have bet on solar power, for one. What was the motivation behind this choice despite the fairly northern location of the city?

Green energy and energy efficiency are one of Tauragė's priorities. This is determined by both ecological and economic reasons. Green energy not only reduces greenhouse gases and air pollution, but is also a great investment, so why not?

Currently, photovoltaic solar modules are installed on 25 public buildings, which produce up to 80% of the electricity required for the building; In Tauragė district, 99% of centrally supplied heat is produced from renewable resources. At the same time the price of supplied heat energy is the lowest in the country, we have the largest electricity-generating wind power park in the Baltic States, and all the streets of the district are lit with energy-saving LED lights, thanks to which the municipality saves 40% of electricity every year.

Only electric public transport operates in the city, and we also encourage residents to buy electric cars by installing more and more electric car charging stations. It is also necessary to mention the importance of energy independence, which is a priority not only for Tauragė, but also for Lithuania due to the aggression of neighbouring Russia and the use of energy as a tool of blackmail. Green energy is one of the guarantors of stability and security, so being "green" is not only right, but also pays off.

Tauragė is also one of the few cities in Europe to offer free public transport. What has been the impact of this decision for the local environment, congestion and social habits?

We performed an analysis of how much revenue the bus fleet receives through subsidies, and how much it collects from residents traveling on intercity and internal city and district routes. We calculated that the latter amount is only about 5 percent of the total required amount.

We believe that it would be socially correct not to collect this money from residents who travel often yet also have the lowest incomes and to cover this amount from the municipal budget instead.

In addition, we would work together to achieve other goals that are related to sustainability. Such a decision contributed to improving the quality of people's lives - it encourages new employees to enter the labour market and increases the availability of social and other services in the area.

Can you share any info about future energy projects that you plan to develop locally with the help of the European Commission to ensure the achievement of climate neutrality by the end of the decade?

We have many plans and ideas for the implementation of the energy sector in Tauragė. For example, installation of photovoltaic modules on apartment roofs, promotion of renewable resource communities, renovation of energy-inefficient apartment buildings, low pollution zones, energy accumulation, more efficient extraction of energy from waste, sewage and other sources.

We want to make more data-driven decisions, so we will focus on energy data collection, analysis and development of an optimal energy model. We also believe that education is particularly important, so a lot of attention will be paid to the education of the population, increasing the literacy of energy efficiency and the development of the Tauragė STEAM renewable resources laboratory.

It is difficult to answer whether these projects are sufficient to achieve climate neutrality, but we think of this mission as a journey and a process, and we have no doubt that this is not an exhaustive list of our energy projects. The future will show what solutions are still needed to become climate neutral.