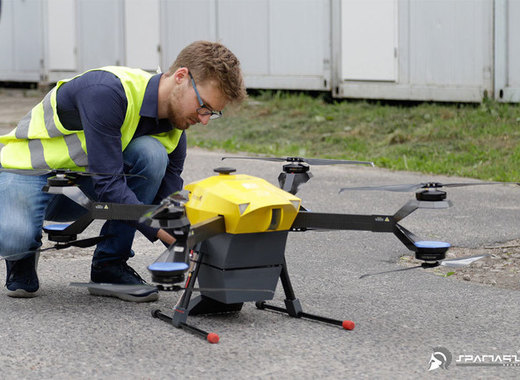 Source: A similar drone was used in Katowice for the test disinfection / Spartaqs Sp. z o.o.

Katowice (Poland) is testing new ways of making urban spaces safe for its citizens and tourists. As the municipality announced, on Tuesday 30 June, a drone has disinfected the benches of the Market Square. The operation, now carried out thanks to a human operator, should be performed by a computer in the future.

A new approach to keeping public spaces free from the coronavirus

The Upper Silesian-Zagłębie Metropolis, the city of Katowice and Spartaqs company from Katowice cooperated in the test disinfection of city benches with the help of the Heracles V8ASD dronoid on Tuesday. They used a drone, which was initially meant to extinguish fires.

The Dronoid Heracles V8ASD is equipped with a 12-litre tank. It sprays a non-harmful concentrate which is used for washing and disinfecting medical devices such as beds, treatment chairs, operating tables and medical equipment. The operation lasted several minutes.

A representative of the Spartaqs company explained that the drone was controlled by a human operator for the test, as the specifics of the terrain and the spraying itself were yet to be studied. However, once this is completed, the drone will be controlled by a computer.

For their part, representatives of Katowice explained that before spraying benches in the Katowice Market Square, they first tested the service in a separate and isolated from air traffic area in the Metropolis. He added that the authorities envision a city in which airspace will be used for new opportunities and tests like this prove that this can soon become a reality.

Robotization and autonomous technologies will play an increasingly important role in our lives. This has been even more visible during the Covid-19 pandemic when a large part of the human work was prohibited due to the social isolation measures. Over the past weeks, drones helped cities to fight Covid-19 in numerous ways – from controlling social isolation or surveying movement to delivering goods and information to people in quarantine.

Beyond Covid-19, unmanned aerial vehicles have many other uses for cities – in winter they have been used by the Polish administration to control compliance with furnaces or burning waste rules.