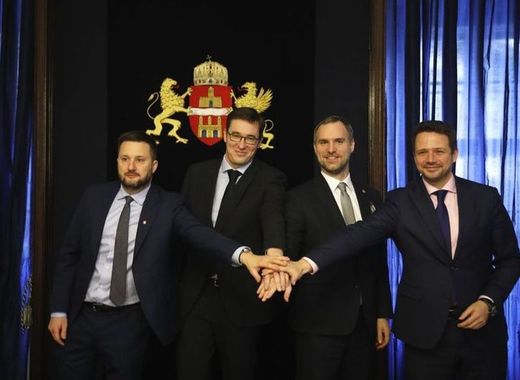 Free Cities Pact was signed yesterday by the mayors of four European capitals at the Central European University in Budapest. The Mayors of Prague, Budapest, Warsaw and Bratislava confirmed that they will be working together and promoting joint projects. Furthermore, the Pact binds them in the commitment to the values ​​of democracy, freedom, human dignity and the rule of law, as enshrined in the EU Treaties.

Mayors Zdeněk Hřib (Prague), Karácsony Gergely (Budapest), Rafał Trzaskowski (Warsaw) and Matúš Vallo (Bratislava) agreed that the Free Cities Pact will be an open platform for other cities and third parties that share the same values. The four cities want to join forces in tackling common challenges, including climate change, the housing crisis or the use of European subsidies.

The parties undertake to:

As outlined in the document, the four metropolises are linked not only by a common history, including shared past of communist oppression, pro-democracy movements, 30 years of social and economic transformation, but also by 15 years of EU membership. Within their countries, they play an important role in innovation, economic growth and well-being and are the engines of their countries' economies.

“The pact also has a symbolic level. It sends a message that we share the same values and that there are voices in our countries that do not identify with populist and nationalist politics. Together we want to give these voices strength”,  Zdeněk Hřib, Mayor of Prague shared on Facebook.

“I believe that our common voice will be heard more than if we were to act alone for our own city. And I hope that in the foreseeable future we will find a number of functional solutions that I see as a way of effectively preventing the rise of another wave of populism. Populism offers easy and attractive ways, but it has been destructive in the long term,” elaborated Hřib.