The Croatian national theatre turns Zagreb into an open stage

With Croatian theatres still closed, the Croatian National Theatre has found an alternative way to delight its audience 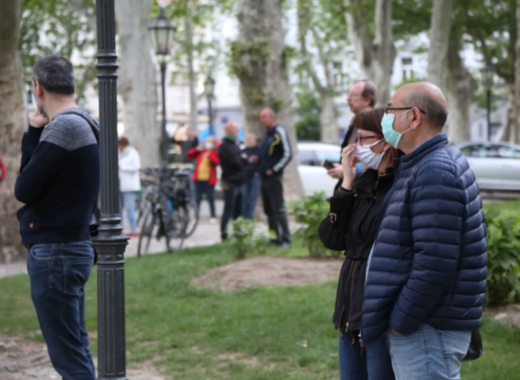 Source: The audience in Zrinjevac park respected the rules of social distancing during the concert. Source: Croatian National Theatre

"All the world’s a stage, and all the men and women merely actors," wrote William Shakespeare, and the Croatian National Theater in Zagreb confirms it with its new project. Although the beautiful theatre building was left without serious damage after the strong earthquake that shook the Croatian capital in March, the theatre remains closed due to the coronavirus pandemic. Willing to brighten lockdown days for its audience, the Croatian National Theatre has launched a new project dedicated to organizing performances in different Zagreb neighbourhoods.

First row on the balcony

Until May 16, the Croatian National Theatre will organize short open-air opera performances for its fellow citizens. The Opera’s soloists will tour Zagreb's neighbourhoods to allow citizens to enjoy some of the most attractive opera arias from their windows, terraces and balconies. The theatre says this is a special “thank you” to all Zagreb citizens who have shown social responsibility in these unusual times of crisis and stayed in their homes.

The first open-air performance was held in the heart of the Croatian capital. Namely, the music pavilion in Zrinjevac park became a stage for the soloists of the Opera. Respecting the rules of the recommended distance, people of Zagreb enjoyed performances of famous opera arias.

Other locations for open-air performances include the plateau near the largest residential building in Zagreb, the so-called “Mamutica” (“The Female Mammoth”), Martićeva Street, Vrbani and Dr. Franjo Tuđman Park. The theatre asks casual passers-by to adhere to all protective measures and social distance.

“Thank you” to a loyal and new audience

Short opera performances are also a gesture of gratitude to the theatre's loyal audience, but also to new spectators. Since the Croatian National Theatre started showing its hit plays on digital platforms at the beginning of the lockdown, the incredible number of 470 thousand views was reached.

The plays were watched not only in Croatia but all over the world, even in Brazil and Japan. Having the chance to see a play for which tickets are usually sold out a couple of months before the performance, surely made many people happier during the lockdown.

The project "The Croatian National Theatre in your neighbourhood" is realized in cooperation with the Zagreb Tourist Board, which will follow the programs on its website www.infozagreb.hr and on its social networks.