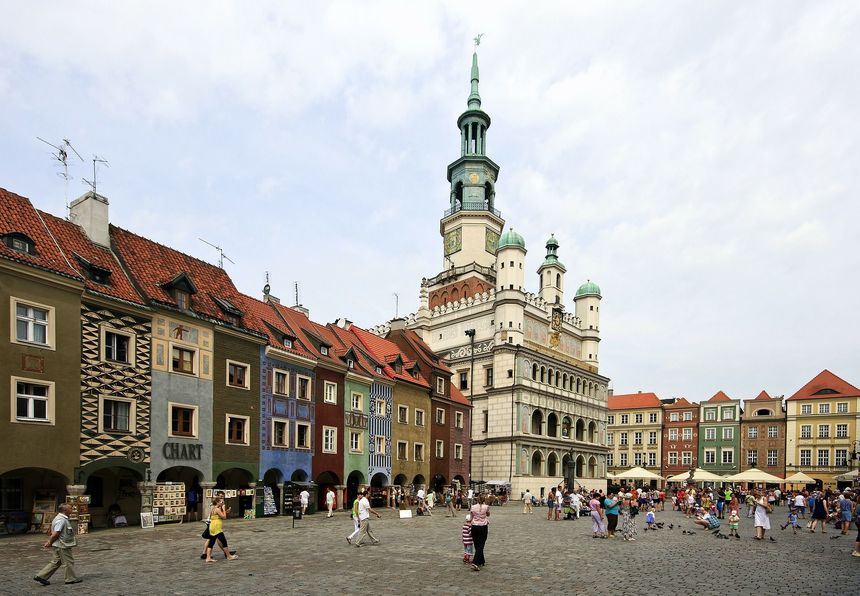 Poznan is one of the oldest and largest cities in Poland. It is the historical capital of the Wielkopolska Region, where the Polish State was born. The origins of the city date back to the 9th century, when a castle-town was established in Ostrów Tumski.

In the 14th and 15th century, the city became an important European trade centre and in the 16th century, experienced its golden age becoming one of the leading centres of culture, medical knowledge and international trade.

The development of Poznan was interrupted by the Swedish invasions, the North War (1703) and natural disasters. In 1793, Poznan and the whole of Wielkopolska were incorporated into Prussia.

At the end of the 18th century, the medieval fortifications were taken down, the city's size was increased to include a few satellite towns and settlements, and new areas in the west were incorporated into the city boundaries. Between 1797-1806, the metropolitan area was united in terms of administration, and later, the city's administrative system was changed to the Prussian system. Poznan, as the capital of the new Province of South Prussia and the seat of the garrison, attracted German administrative and military staff, and then German settlers. Gradually, the number of German inhabitants grew, from a few dozen to over 40 % until the end of W.W.I.

In the end of the 18th and beginning of the 19th century, the city saw the construction of its first large municipal infrastructure and newly launched industrial facilities. Dynamic development of the modern municipal infrastructure took place in the 19th century. The period of Prussian dominance ended in December 1918, after the outbreak of the uprising in Poznan that led to the liberation of Poznan and the Wielkopolska Region.

The Germans occupied Poznan on September 10, 1939. Poznan was incorporated into Germany. After 1944, the city was destroyed by successive air raids of the allied forces. Poznan was liberated on February 23, 1945 with war-related damage reaching 55%.

Political changes in post-war Europe affected the city’s development over the next 45 years. The initial years after the war were devoted to the reconstruction of the city's economy and social life. The decree on nationalization led to changes in the ownership structure of the city and the industrial infrastructure. By the 1950s, Poznan was one of the most industrialized cities in the country. In the second half of the 1970s, Poznan witnessed a gradual regression of its industry and other sectors of the economy, which lasted till the end of the 1980s.

The process of political and economic transformations which began in 1989 upset the balance in the structure of Poznan-based enterprises, leading to a considerable decrease in production. This changed with the privatisation and the share of private capital, including foreign capital, considerably increased in the city's economy.

Poznan is located in Western Poland. Divided into 42 neighbourhoods, it has an area of around 261.3 km2. The metropolitan population is estimated at around 1.4 million persons as of December 2019.

Poznan has been an important trade centre since the Middle Ages. It has a particularly robust  economy, characterised by strong investment attractiveness and unemployment rates that are  several times lower than the national average. It is home to one of the largest shopping centres in Central Europe – Galeria Malta, as well as to several corporations, including Allegro, Solaris Bus and Coach, GlaxoSmithKline. 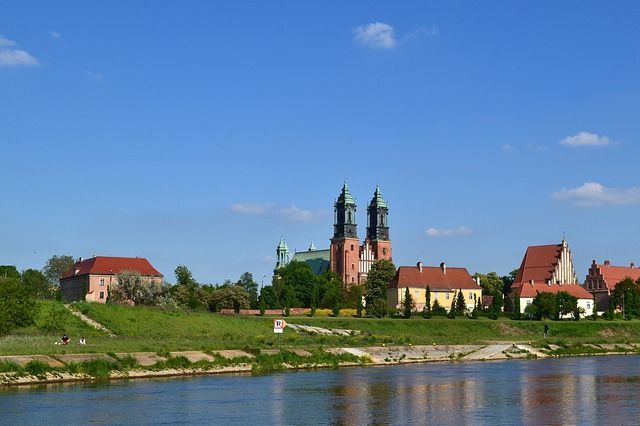 There are four large lakes within the city limits; three of them lie in the Golęcin (Western) green wedge, leading from the centre along the Bogdanka River through Sołacz, Golęcin, and Strzeszynek to Lake Kierskie. 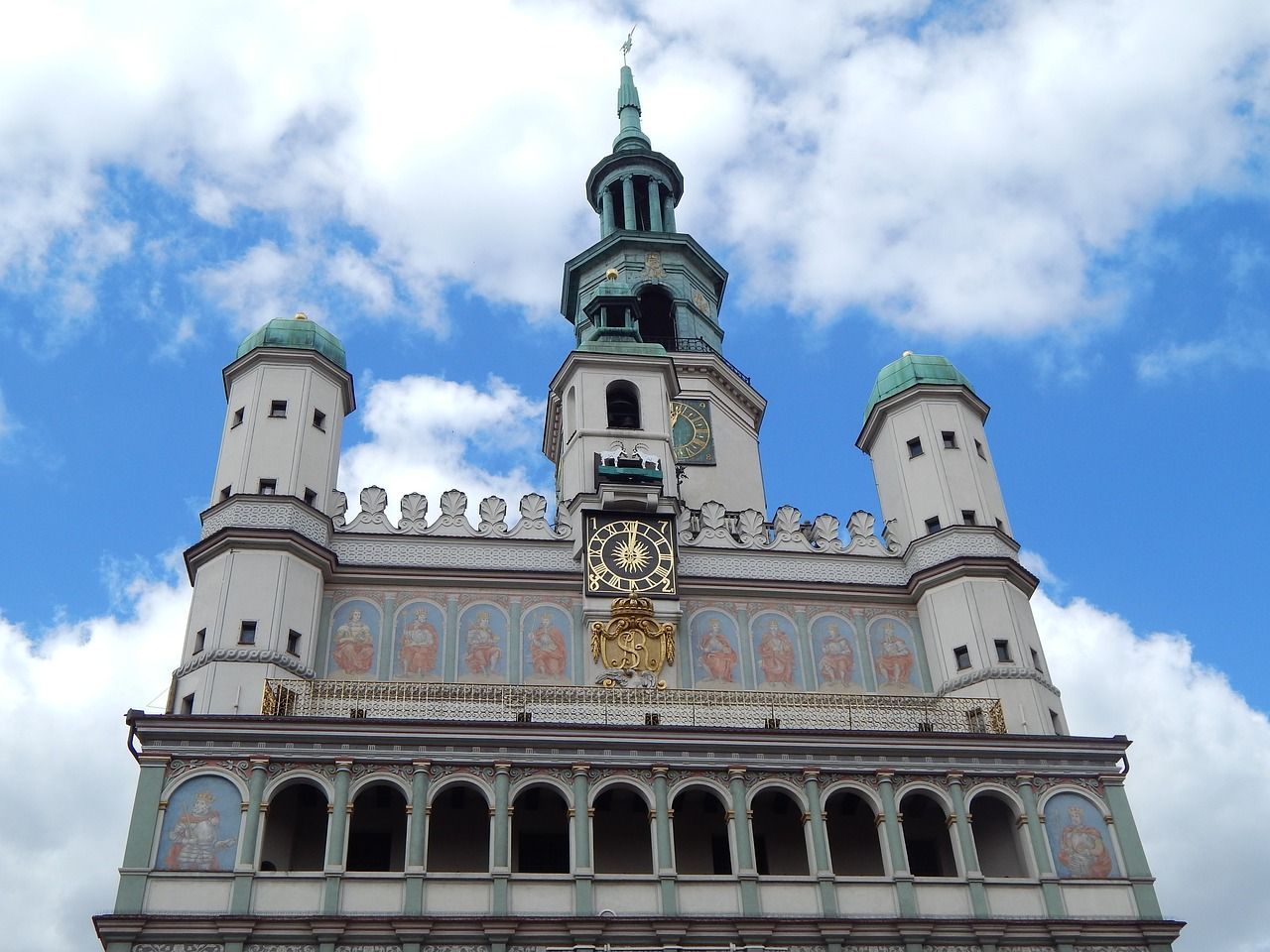 The Poznań Town Hall is undoubtedly the largest Renaissance building in Greater Poland and one of the most beautiful in the country. It was probably built at the turn of the 13th century. The Gothic town hall was a small, multi-storey building, over which, probably at the beginning of the 16th century, a slender tower was erected. In the mid-16th century, after a fire partially destroyed the old Town Hall, Italian architect Jan Baptist Quadro from Lugano extended the Town Hall westwards, thus supporting the collapsing Gothic tower. Currently, the Town Hall is the seat of the Poznań History Museum. 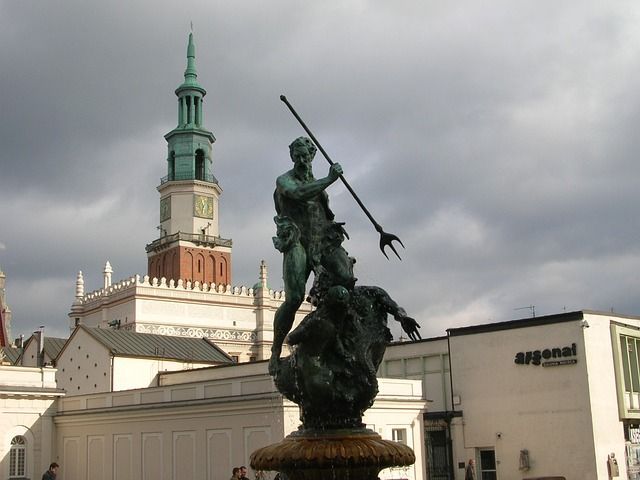 At the corner of the Old Market, at the way out of Szkolna and Paderewski streets is located the Neptune fountain. The sculpture set in its basin is the work of Adam Piask and Marcin Sobczak. The fountain was unveiled in 2004 to replace the long-lost original.